Creators
Bialas, John, Author
Dancavitch, Mary
, Recipient
Media Type
Object
Text
Item Type
Correspondence
Description
A five-page, double-sided, handwritten letter in blue ink on white paper with a header printed in black and red ink reading: "Keep in touch with the folks back home" ON ACTIVE SERVICE with the CANADIAN FORCES", and The Salvation Army logo on the top left corner. Letter is written by John Bialas to his sister Mary Dancavitch while serving with the Westminster Regiment near Coriano, Italy on 18 September 1944.

John writes that he will be resting for the next few days, and therefore has time to write. He says when they return to fighting, he doesn't expect it to be half as bad as recent events, but will wait to tell the stories in person. John writes that he received three letters from their Mother, but "had to pull some tricks with my mail to get them out of here." He discusses family and family friend affairs, of individuals home in Brantford, and friends serving overseas including a Jim, and Mr and Mrs Molineux. John tells Mary if she'd like his skates, to write to Mrs Perry in England, and she will send them home, "but I imagine I'll be returning (I hope) so when I do I'll probably pick them up." John responds that he'd like [chocolate] bars and gum for Christmas, and expects to be home by the Christmas of 1945 or May 1945. He doesn't want clothes, rum, or brandy for Christmas because he doesn't have space, and because it's easy to get a variety of wines from Naples and Rome. He continues saying grape season is almost finished, but figs and peaches are ripe, and he's looking forward to receiving parcels in the winter when they will be mainly eating meat and vegetables. John inquires about the money he sent home, and that he heard it could take three months to be delivered. He asks his family to develop the roll of film he previously sent. John describes his living condition as sleeping in fields, houses, ditches, "any where that looks good, even in wop houses with nice mattresses and spring beds some times, just goes to say where we are."

This is the last letter written by John to Mary, as he was killed in action six days later on 24 September 1944.
Notes
John Joseph Bialas, the eldest son of John and Katherine (Serdersky) Bialas, was born on 7 May 1921 in Brantford, Ontario. He attended St. Basil’s Separate School and was a member of the St. John the Baptist Ukrainian Catholic Church. He was one of Brantford’s best known young hockey players, playing for St. Basil’s, the Brantford Lions Club Hockey Team in 1940-1941, and the following year, on the Akron Clippers team in Ohio as a left defenseman. His love for the sport was apparent as he took his skates with him overseas. He worked at the Universal Cooler Company of Canada, Ltd. in Brantford, with “tin smith and acetylene welding” listed as his trade on his enlistment papers. Other service records note that his most recently employment was at Ford Motors Co. in Windsor, Ontario as a Drill Press Operator, for two months prior enlistment.

Dear Mary:
Received your very lovely letter of Aug 27th two days ago but answered every one else’s letters first because I wrote to you about 5 days ago and did not have a letter from you Mary. So I think even though you write quite often I am still ahead of you in the letter writing.

As you know Mary I am resting again only for three or four days this time. I told Ma a week but I think in another two days I’ll be at it again, just after I wrote you your last letter I was in for a couple days but it wasn’t half as bad as before

but you will have to wait and hear the story personally if I am able to tell it and I think I will be because the worse part is over, the easy stuff is to come.

It really feels good though nice and quiet here. I wrote letters all day yesterday and probably will do same to-day because every thing else is in good shape the wop lady is doing my laundry so all I have to do now is catch up on the rest of my letter writing. Believe it or not but I had three letters from Mother but I had to pull some tricks with my mail to get them out of here.

I certainly am surprised at the Mr. & Mrs Molineux’s driving up to Kitchener and Brantford like that. I guess they were so happy about it that they first had to come up and tell you.

Jim certainly wasn’t kidding when he said he wasn’t feeling up to par, but boy it was good news to hear he is getting better which I didn’t think could happen but it sure as heck did.

By the look of his address he is still in Italy or Africa and it is a homeward bound address. They go for home from there or England. But I wouldn’t tell Mr or Mrs Molineux that because he may just be stationed there and they would be expecting him to come home and he never will tell after the war. So it would be a great disappointment so let Jim tell them himself if he is ever going home or not.

I don’t call Mr. Molineux Sir because he’s an officer or Sgt. I feel that I should call him that and I do. As for some

officers and Sgts they do get named but most of the time it is best to keep the name to yourself. If they deserve a Sir they get it if not they still get it, But boy do I think a lot ha ho,

I knew that the Molineux’s wouldn’t hear from Jim that is why I wrote to them. But boy by what you say Mr Molineux certainly tried his darndest to find out about Jim.

Mary if you should by any chance want my skates from England well just write to Mrs Perry she will send them to you whenever you ask for them, but I imagine I’ll be returning (I hope) so when I do I’ll probably pick them up.

I haven’t heard any thing about it yet Mary but if they have they will probably let me know in the next letter which I’ll receive from them.

You asked what I’d like for Christmas, Mary, well any thing at all will do afew bars and gum, no clothes what soever but I’d more rather like to be home. I think for the xmas of 45 I ought to be or May 45.

I’ve had lots of mail from Joe and he also tells me he has received and answered mail from everyone quite often, so just give his mail a little time and you will receive it as regular as you receive mine, which is very good (ahem)

him he didn’t know where to spend it, Scotland, London or Wales but I imagine the next time I hear from him he will be back from his leave.

Say Mary! that Al is getting as nosy about my love affairs as you used to be so I imagine I’ll just have to keep you both guessing, ha ho, In fact some time I’m guessing myself, so I guess all three (of us are in the same boat – now (quit asking questions!)

As for that Bottle of Rum or Brandy for Christmas Mary I’d rather you wouldn’t, we have an issue while fighting of two kedicoks[?] of rum a night and I give mine away. Maybe Joe would like it but I’d still rather Daddy would get it. You can buy any type liquor in Naples & Rome. wine – wine and different kinds of wine, ho he,

Oh yes! the grape season is near ended but the figs and peaches are getting good so we still eat on the move. I don’t know what we will do in the winter time. I guess you will have to send parcels. We have so much bully beaf [beef?] that I could send Ma a couple cases, that and M & V (meat & vegetables) the guys hate it like poison and do we ever get plenty of it!

About Daddies watch I’ve had more than the chances to get it but it seems every one but me has a watch on each wrist and one in the pocket – more stories.

Your all wrong when you looked up your Geography on fruit in Florence you should have looked it up on fruit in the Adriatic around Coriano, what is the fruit like there and I’ll tell you if you are right, look up on puc[?] also

About that $93 I was told it takes three months to get home so Ma has another month. I see where Ma has received the check- the pensil badge and my $50 war bond receipt but she still has 10 american dollars and my souvenir parcel to receive so check up on things also the film in the large parcel – develop it!

You asked of jerry ground sheets I now have more than I know what to do with. as for lockers where do you think we are. We sleep in fields houses ditchs any where that looks good, even in wop houses with nice mattresses and spring beds some times, just goes to any where we are.

I don’t imagine you realize it Mary but this is no 10 so high time I quiet[?] even you don’t write that much. I’ve received dozens of pictures which Ma developed in the water I think afew more then asked for to. ho ho,

Well sorella I must finish because I’ve over done it, so long and write soon. 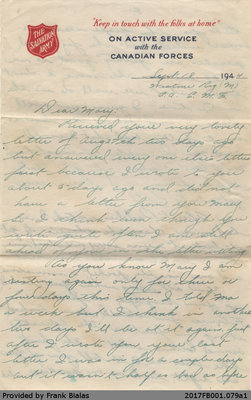