Media Type
Image
Text
Item Type
Postcards
Description
Black and white postcard of four Royal Canadian Air Force aircrew members, all wearing No 5 a service dress uniforms, standing under the wing of a Hudson aircraft. From left to right are E. R. Hodge, Pilot Officer F. E. Davies, Flight Sergeant R. N. Martin, and Jack Tate. The crew flew out from Mont-Joli, Quebec on an anti-submarine patrol on 14 October 1942, as they all died in a flying accident.
Notes
John “Jack” Chapple Tate was the youngest of three children of George R. and Gertrude Louise [Chapple] Tate, born in Paris, Ontario on 19 January 1911. He grew up at 79 Walnut Street, and attended Paris Central Public School, Paris District High School, and St. James Anglican Church. His sister Lucy Margaret Tate was a teacher at Paris Central School, and his brother George R. Tate was a foreman at the Gypsum, Lime & Alabaster plant in Caledonia. 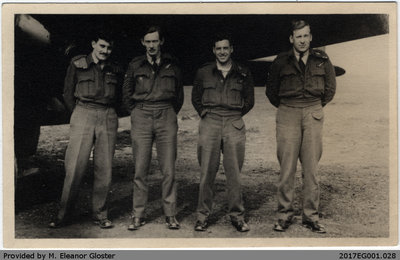