The photo album was owned and compiled by either John “Jack” Chapple Tate and/or Mary (Welsh) Tate. Jack was a Flight Officer in the Royal Canadian Air Force, and served from June 1941 to June 1942 with the Royal Air Force 407 “Demon” Squadron under the Coastal Command in England; when he returned to Canada he was stationed at Yarmouth, Nova Scotia.

The photographs depict Jack’s embarkation from Canada at the Halifax Depot, his crewmembers and they’re journey across the Atlantic, the multiple places in England they were stationed, and where they took their leaves. There are also photographs of Jack’s wife Mary (Welsh) Tate in Ayr, Brant County, Brantford, and Yarmouth. The last photograph in the album depicts Jack Tate and Mary Welsh on their wedding day on 20 July 1940. 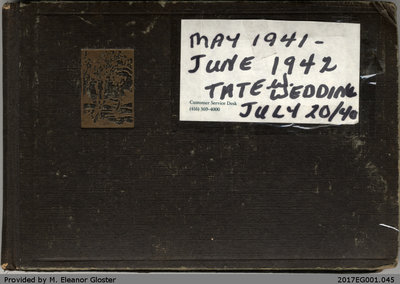