There are two areas cut out of the letter, which although makes it difficult to read and determine the content, it is an interesting object demonstrating the postal censorship during the Second World War.
Notes
John “Jack” Chapple Tate was the youngest of three children of George R. and Gertrude Louise [Chapple] Tate, born in Paris, Ontario on 19 January 1911. He grew up at 79 Walnut Street, and attended Paris Central Public School, Paris District High School, and St. James Anglican Church. His sister Lucy Margaret Tate was a teacher at Paris Central School, and his brother George R. Tate was a foreman at the Gypsum, Lime & Alabaster plant in Caledonia.

much lately.
Just heard today that one of our […]. The pilot was Don Moss from Toronto. The observer came from Saskatchewan.
Believe I told you that I met Bruce Wright in London. One of our crew […] shot the field, tried to climb back up and nosed into the […]

There is not much to write about Margaret. Say girlie if you ca[…] ca[…] clean cigarette[…] cheap one Margaret as such things are hard to keep. You know other people take a fancy to them. […] parcel reaches[…] Jessie too. Have you met her yet? There are lots [...]

Rectangular forest green ½ pence stamp and an orange 2 pence stamp, both with the portrait of King George VI in the centre with the Tudor Crown above his head, and flowers in each corner. Along the left and right edges it reads “POSTAGE / REVENUE”.

Two sets of seven black wavy lines on the top right corner, partially over the stamps. 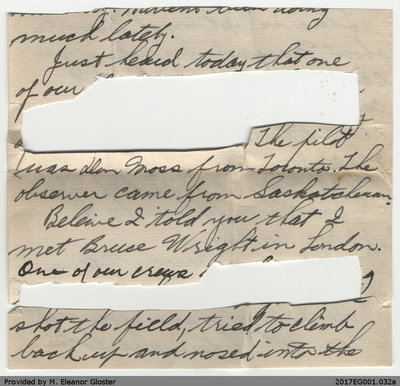