Three sets of seven black wavy lines on the top right corner, partially over the stamp.

Octagonal border stamped in red ink with the Tudor Crown and “PASSED / P.U.60” below, indicating the letter passed the postal censorship inspection.

Stamped in black ink on the left is a woman dressed in an Imperial military uniform holding a sword upright.

Dear Margaret
Thank you very much for the cigarettes. Sure was glad to get them. Please send lots more. How is Dad? Hope you are all fine. Writing to Mary Pike tonight. Had a very nice letter from her this week. Have you seen Mary lately? She is not very well I believe. I know you will be good to her. Getting in lots of flying time.
Love to all Jack
Date Of Event
18 October 1941
Subject(s)
Postcards
Military
Second World War
Personal Name(s)
Tate, John "Jack" Chapple
Local identifier
2017EG001.030
Language of Item
English
Geographic Coverage
Donor
M. Eleanor (Tate) Gloster
Copyright Statement
Copyright status unknown. Responsibility for determining the copyright status and any use rests exclusively with the user.
Recommended Citation
Postcard, John "Jack" Chapple Tate to Margaret Tate, 18 October 1941, M. Eleanor Gloster. 2017EG001.030.
Terms of Use
The information and images provided are for personal research only and are not to be used for commercial purposes. Use of this information should include the credit "County of Brant Public Library".
Contact
County of Brant Public Library
Email
WWW address
http://www.brantlibrary.ca/
Agency street/mail address
County of Brant Public Library (Paris Branch)
12 William Street
Paris, ON
N3L 1K7 | @brantlibrary 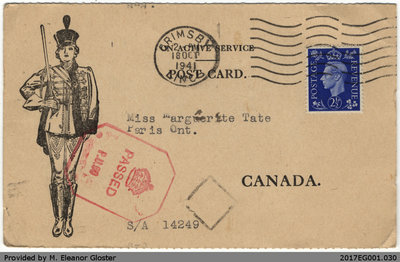