2017EG002.005: Black and white photograph of Dr. Courtland Casimer and Ann Fissette’s house at 110 Darling Street, in Brantford, Ontario. A dirt road, grass, sidewalks with two trees and a telephone pole are in the foreground, with the Fissette’s stone home on the centre, with an automobile in the driveway. The house is asymmetrical with an alcove on the right half of the façade and a multi-gabled roof. Five stairs lead up to a six pillar porch with side railing, detailed brackets, and a second story balcony. The door on the back left side of the house has writing on it, possibly serving as the entrance to Fissette’s general practice. Partial buildings are seen on the right and left of Fissette’s house. The photograph was possibly taken during the fall or winter, as there are no leaves on the trees or the vines on the house.

Photograph is captioned “Our House 1919 Brantford”.
Notes
Courtland Casimir Fissette was born on 4 June 1875 to Thomas and Mary J. [Oversholt] Fissette in Nanticoke, Haldimand County. The French Canadian family lived in Walpole, Haldimand when Courtland was a child, and moved to Brantford during his teenage years. He married Anna Margaret Wisner (born 6 November 1876) on 4 November 1904 in Brant County, and the couple lived at 110 Darling Street in Brantford. Courtland was a physician and surgeon, and ran a general practice out of his home. The house is now the parking lot for the Charlotte Villa Retirement Residence. 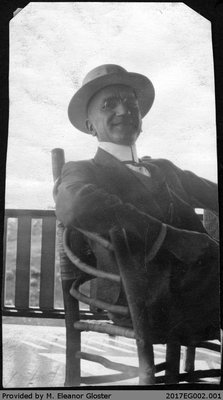