Media Type
Image
Text
Item Type
Photographs
Description
2017EG002.002: Black and white photograph of six medical staff, five men and one female nurse, wearing long white jackets, standing around an operating table layered with white sheets. The group is inside a building with large windows in the background, which are presumably the buildings depicted in 2017EG003 and 2017EG002.007.

Dr. Courtland Casimer Fissette is on the far left, wearing a white jacket and dark gloves, and is standing behind the operating table.

2017EG002.003: Hand tinted photograph depicting green fields of either crops or grasses in the foreground, trees in the background, and a blue sky. There are six identifiable light-coloured buildings on the right with another indistinguishable group of white buildings in the background, suggested to be the hospital where Fissette worked. Two men in uniform are walking along a road beside the white buildings.

2017EG002.007: Black and white photograph with grass in the foreground, and the same light-coloured buildings with several large windows depicted in 2017EG002.003. There is an ambulance (a truck with the Red Cross symbol of a red cross on a white circular background) waiting in front of the doorway, and a pile of material to the left near the end of the building.

Photograph is captioned “England 1917”.
Notes
Courtland Casimir Fissette was born on 4 June 1875 to Thomas and Mary J. [Oversholt] Fissette in Nanticoke, Haldimand County. The French Canadian family lived in Walpole, Haldimand when Courtland was a child, and moved to Brantford during his teenage years. He married Anna Margaret Wisner (born 6 November 1876) on 4 November 1904 in Brant County, and the couple lived at 110 Darling Street in Brantford. Courtland was a physician and surgeon, and ran a general practice out of his home. The house is now the parking lot for the Charlotte Villa Retirement Residence. 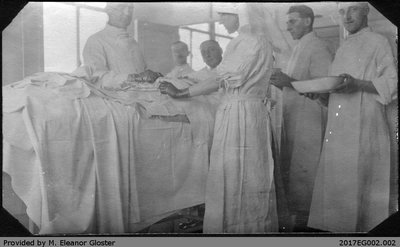