Media Type
Image
Item Type
Photographs
Description
A series of black and white photographs of the Royal Canadian Air Force military procession and funeral of John “Jack” Chapple Tate. 2017EG001.006 and 2017EG001.007 depict the beginning of the military procession starting from St. James Anglican Church located at 8 Burwell Street, Paris, Ontario. 2017EG001.008 was taken at the corner of Burwell and Grant River Street South. With the military march procession leading down Grant River Street South toward Grant River Street North, 2017EG001.009 was taken near the intersection of Grand River Street South and Dumfries Street – the houses and buildings depicted are still there today. 2017EG001.010 was taken near Grand River Street North and Mechanic Street featuring the RCAF band with a “Buy Victory Bonds Now!” banner hung between the telephone poles. The funeral march continues along Grand River Street North as depicted in 2017EG001.011; notice the store fronts such as John W. Hall’s which still exists today. 2017EG001.012 illustrates the funeral march turning east onto William Street to cross the William Street Bridge, going towards the St. James Anglican Church Cemetery located at Nimmo Street. 2017EG001.013 to 2017EG001.017 depicts the military funeral service held at the cemetery, and his casket covered with flowers. It is presumably the Tate family headstone that is featured in the foreground of 2017EG001.014 and 2017EG001.015, where his mother, and later his father, were buried as well.
Notes
John “Jack” Chapple Tate was the youngest of three children of George R. and Gertrude Louise [Chapple] Tate, born in Paris, Ontario on 19 January 1911. He grew up at 79 Walnut Street, and attended Paris Central Public School, Paris District High School, and St. James Anglican Church. His sister Lucy Margaret Tate was a teacher at Paris Central School, and his brother George R. Tate was a foreman at the Gypsum, Lime & Alabaster plant in Caledonia. 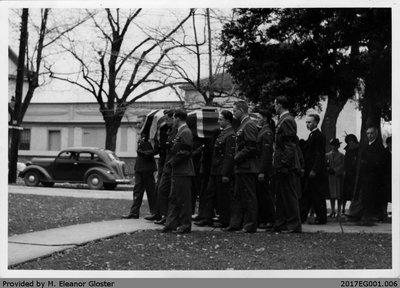