Mystery Question
Can you identify the man on the right?
[Please answer by clicking on the Comments tab]
Media Type
Image
Text
Item Type
Photographs
Description
Black and white photograph of Jack Tate [left] and an unidentified male [right], both wearing a Royal Canadian Air Force No. 5 service uniform and peak cap, and smoking a cigarette. The unidentified male has a wing badge over his left breast, although the rank is unknown. They stand in front of the main façade of the Peace Tower of the Parliament Building Centre Block in Ottawa, Ontario. Above the arch is the Coat of Arms of Canada escutcheon surmounted by the Tudor Crown or the Imperial Crown, surrounded by twenty flags, possibly the provincial flags.

Photograph is captioned "Ottawa, 1942."
Notes
John “Jack” Chapple Tate was the youngest of three children of George R. and Gertrude Louise [Chapple] Tate, born in Paris, Ontario on 19 January 1911. He grew up at 79 Walnut Street, and attended Paris Central Public School, Paris District High School, and St. James Anglican Church. His sister Lucy Margaret Tate was a teacher at Paris Central School, and his brother George R. Tate was a foreman at the Gypsum, Lime & Alabaster plant in Caledonia. 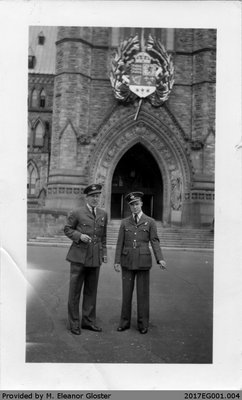