Media Type
Image
Text
Item Type
Photographs
Description
Black and white photograph of John "Jack" Chapple and Margaret Tate on their honeymoon in Ottawa following their wedding in July 1940. Jack wears his Royal Canadian Air Force No. 5 service uniform and a Junior Officer's peak cap, and an Air Gunner badge over his left breast. Margaret is wearing a button-down knee length dress, and is holding a purse under her left arm. The couple is standing at a distance in front of the Peace Tower and Centre Block of the Parliament Buildings in Ottawa, Ontario.
Notes
John “Jack” Chapple Tate was the youngest of three children of George R. and Gertrude Louise [Chapple] Tate, born in Paris, Ontario on 19 January 1911. He grew up at 79 Walnut Street, and attended Paris Central Public School, Paris District High School, and St. James Anglican Church. His sister Lucy Margaret Tate was a teacher at Paris Central School, and his brother George R. Tate was a foreman at the Gypsum, Lime & Alabaster plant in Caledonia. 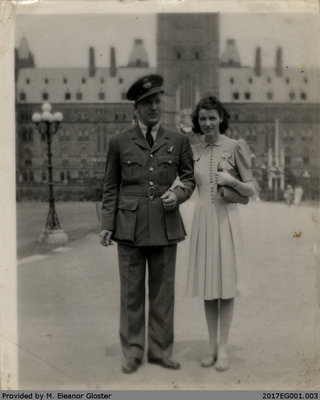