The Glen Morris United Church Manse was built starting in 1856 after Samuel Latshaw donated four acres of land to the Glen Morris United Church. The purpose of the Manse was to house the ministers of the church, and the Manse is still a minister’s residency today. Construction was finished in 1857, and Reverend John Dunbar was the first of the congregation to live in the home. Starting in 1908, annual garden parties were held on the Manse grounds. Over the years, many ministers have resided in the house, and very few times has the home been rented out to someone who was not serving as a minister at that time. Updates to the Manse have been made, that includes the installation of electricity, the construction of a front porch in 1924, and the renovation of the laundry room at the back of the house.1

1896 – The Manse was Furnished by the Ladies Aid Society, Organized by Mrs. William Wallace1

Funds were raised by the organization to support the upkeep of the home and provide necessities.

1924 – A New Furnace and Front Porch Built by J.J Howlett was Funded by the Ladies Aid Society1

1959 – The Barn at the Manse was Removed, and a Garage was Constructed1

1966 – The Manse Kitchen was Remodelled1

1971 – A Washroom was Installed on the Ground Floor1

The minster that began in this year already had a home and had no need for the Manse. The Manse was then rented to someone else. It is possible that this happened in earlier years as well, but renting out the Manse was rare.2

John Dunbar was born in 1818 in St. Andrews, Scotland to Scottish Millwright Immigrant, William Dunbar. At sometime early in his life, Dunbar traveled to Toronto with his parents. He was later educated at Victoria College in Cobourg, after which he prepared for ministry. Once finished his education, John Dunbar came to Glen Morris on a horse and served as a reverend from 1853-1876. For the first few years in Glen Morris, he resided with Mr. James Smith on East River Road. Then in 1857, Dunbar moved into the Church Manse. During his residency, many pleasant gatherings occurred at the Manse. Revered John Dunbar was described as having a “warm social disposition” and a good sense of humor. In his first year as pastorate, he doubled membership at the Glen Morris United Church.1

The Glen Morris United Church Manse, situated beside the cemetery, is a two storey stone home of the Field Stone architectural style. The home is a single detached rectangular structure with a small wooden addition on the back of the building that was once a summer kitchen and has since been renovated into a laundry room.2 The front of the home has a center gable and symmetrical layout, and decorative verge board. Stone chimneys are located in the center of the roof on the left and right sides. An arched Palladian window is present on the second floor underneath the gable, and features stone soldier coursing. The windows are flat structured, 2/2, and double hung. The front entrance has a door with sidelights and a transom. The front porch was built in 1924 by J.J. Howlett and is supported by square half-columns. On the back wall of the home, there is a dormer window at the roof that has a gable with overhang. 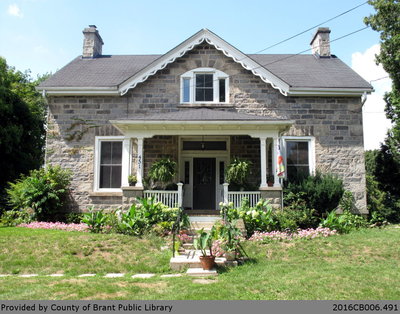