The Glen Morris United Church, located on East River Road, was constructed in 1847 on land donated by Samuel Latshaw, the founder of Glen Morris. Construction of the Field Stone church finished in 1849, and the church was officially opened in November of that year. Initially a Presbyterian congregation, the church was united in 1925. Over the years, many updates to the inside of the church have occurred including painting, and the addition of new furniture, windows, and doors. Two additions have been made to the back of the church in 1879 and 1968.1

The church was constructed mainly by parishioners and volunteers. Stone masons were John Mills and R. Owens. A.F Campbell was the plastered and William McCrea laid the floor. John McPherson, James Todd, and Thomas Bell were trustees for the committee.

1849 – Construction Finished and the Church Opened on November 111

Reverend James Roy was the first minister. The Young People group began that lasted until 1852. The total cost to build the church was $2,000.

1853 – Sunday school Began with Gavin Fleming as the Superintendent1

Also during this year, John Dunbar became the first permanent minister, and the first elders were ordained.

More information on the Manse can be viewed by clicking the link on the right.

The trees cost 20 cents each.

The seats were reversed and the floor leveled.

1887 – Chandeliers Were Purchased and the Church and Vestibule Was Decorated1

1895 – Additional Land was Purchased for the Cemetery1

Membership at this time was 160.

The table was purchased from John Carswell and was refinished in light oak by J.J. Howlett.

1925 – The Church was United After Union was Declared1

At this time, the church had been Presbyterian for 76 years.

1949 – A New Front Door and Vestry Door Lights were Installed1

The Glen Morris United Church is of the Field Stone architectural style, much like the Glen Morris United Church Manse. The original building was a single detached rectangular structure, but now has two visible buildings that have been added to the back of the church. The vestry, added in 1879, is made of stone and has a door with a plain pediment. The other addition was built in 1968 and is called the Fellowship Room. It is a square, grey brick building where Sunday School is run.1

The church has 20 inch thick walls and a cut stone front with rubble stone sides.2 Decorative quoins are present on the corners of the main façade. The main door is on the gable façade that features a symmetrical layout and flat structured windows with semi-circular panes. These windows have flat lintels made from cut stone directly above them. A half elliptical window sits under the gable, and stained glass windows are present on the sides of the church. A stained glass transom sits above the main double doors. To the side of the main door is a plaque, indicating the name and construction date of the church. The Glen Morris United Church has no tower or steeple.1

There are six large maple trees along the edge of the property, planted in 1872. Directly beside the church is the Glen Morris United Church Cemetery, and further down this road is the Manse. 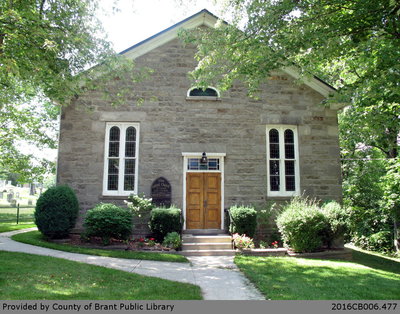