All Saints’ Anglican Church is the oldest surviving church building in the village of Mount Pleasant. Typical of Anglican churches of the 1800s, the original congregation consisted mainly of Colonial elites. The architectural style is Gothic-vernacular, as many parishioners of the church helped to build the structure using local resources.2 The Gothic features include centre pointed windows and transom.

In 1845, Richard McAlister donated the land for the church and the structure was built using lumber from a local farm. The exact date of construction was controversial up until the excavation of the church’s basement in 1948 revealed old documents outlining the church’s early history. The church was consecrated in 1854, and in the years following, services began being recorded. The church was part of the Diocese of Toronto from its inception, but was under the Diocese of Huron beginning in 1857. It was recorded that in 1865, the clergy was struggling financially after the original Churchwardens, Abraham Cook and the Racey family, were no longer active in the congregation. Over the years, renovations and changes have taken place to both the interior and exterior of the church. Stained glass windows and an organ were added, new front doors were installed, and the church’s steeple point has been replaced. In 1994 the church’s original entrance was removed and rebuilt. 3

The church was built parishioners as well as contractors James Fordham and Edwin Baldwin. Timber was used that came from the Ferris farm, a family that was a large supporter of the church erection. Reverend James Cameron Usher, originally in charge at the Mohawk Chapel, was the first Rector of All Saints. The church was under the Diocese of Toronto.3

Margaret Wilson of Mount Pleasant was baptised on May 2. This was sponsored by William and Jane Wilson.

1854 – The Church was Consecrated by Bishop Strachan1

Susan Simmerman and Jacob Moore were the first couple to have their marriage at All Saints’ Anglican Church recorded.

1865 – The Finances of the Clergy Struggled

After the Racey family left the village and the death of Abraham Cook in 1864, All Saints’ Church lost many generous supporters. The Clergy were receiving very little funding and living off of produce donated by the congregation as well as what little could be grown on the land.3

1875 – A Shed was Built for Horses, the Church was Painted, and an Organ was Purchased3

1919 – An oak Tree Fell Through the Chancel After a Windstorm3

The tree caused the memorial window to fall to the ground, however it remained unbroken. During renovations because of the incident, a supporting chancel arch was added.

1933 – An Electric System was Installed by the Forrest Family3

1948 – The Basement was Excavated and a Heating System was Installed3

During the excavation, the 1845 cornerstone was discovered as well as a bottle filled with documentation. The documents had information about the beginnings of the All Saints’ Church including the year it was constructed, the contractor’s names, and the name of the Churchwardens.

1954 – Renovations to the Basement were Completed3

1960 – The Windows of the Church were Repaired3

1994 – The Old Church Entrance was Completely Removed and Renovated3

This building is the oldest surviving church in Mount Pleasant and is of the Gothic-vernacular style architecture, typical of early Upper Canadian church architecture.2 Vernacular architecture relies on the local resources and skills available. In the case of this church, local Parishioners helped to build the church with whatever construction skills they possessed, using lumber milled on the Ferris farm nearby.3

All Saints’ Anglican Church is a single detached building with a rectangular plan and single centre inset tower. This tower is square shaped with finials on top of all four corners, features that resemble an English Parish Church. The main entrance is on the gable façade and consists of centre double doors. The church has a medium pitched roof and is made of horizontal vinyl siding. The church’s Gothic features include centre pointed Gothic windows and a unique Gothic transom above the main entryway. The trim on the roof features eaves with return. Stained glass windows are present that were first added in 1908.3

The interior of the church has original oak furnishings including oak pews. There are pine floor boards and an altar, both of which are also original features.3 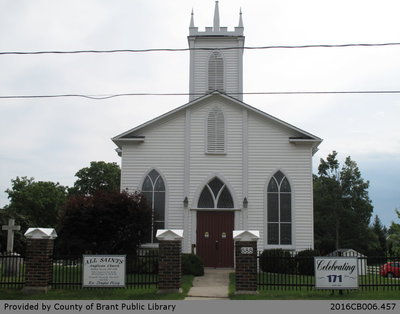