The Harley Homestead of the Burford Township was built circa 1843 for Archibald Harley (whom the town of Harley was named after) and his family. Archibald was a politician and engaged in farming while residing on the homestead. The house was constructed in three separate units due to finances and availability of resources. The original structure has vertical siding and a white garage door. Around 20 years later it is presumed that the middle unit was built, followed by the last structure. All three units have different types of lumber that are representative of the order in which they were built.3

Little is known of the ownership between the Harley and the Robbins family in 1955. In the 1950s, many renovations took place to the home. A furnace and indoor washroom was added to the home and the outhouse was removed. The home used to have a pocket door and set of stairs leading to a summer kitchen. Another set of stairs went into an apartment unit that had two upstairs bedrooms as well as a sink that was rare for its time. The property used to have cherry trees that have since been removed, and one of the larger trees on the property has been replaced with a garden. In the 1970s, verandah on the west side of the home was replaced with an enclosed box-like structure.3

c. 1843 – The Home was Constructed for the Harley Family4

Although other Harley homes were located in the area, this house was owned by Archibald Harley and is believed to have been the homestead. The home was built in three sections, the first being the section in the left of the photo.3

It is estimated that this unit was added 20 years after the construction of the first section.

1954 – The Silo was Built by Clifford Benson. Hurricane Hazel Blew Down the Smaller Barn on the Property3

A furnace and bathroom were installed. The outhouse behind the home was removed.3

c. 1970 – The Verandah was Taken Down and Replaced with an Enclosed Unit3

Archibald Harley was born in Newcastle, New Brunswick on October 10, 1824 to Irish native William Harley and Scotland native Miss McLean. He moved to Toronto with his parents, and then to Hamilton for his education. He once resided in Pennsylvania for 2-3 years but moved back to Canada to the County of Burford Township.2 He first moved to Harley in 1850 and returned again in 1866 after the dissolution of a lumber company owned with his brother in law James F. Wilson in Ancaster. Upon moving back to Burford Township, Archibald engaged in farming.1

Archibald Harley married Elizabeth Stewart and together had ten children (William, James, John, Luther, Sarah, Arthur, Edmund, Edgar, Annie and Archibald). Mr. Harley served as a Reeve of Burford, Deputy Reeve, and Warden of the County. He was elected to the House of Commons in South Oxford in 1882, and at one time was the Treasurer of Burford Township.2

Archibald was known as a Reformer and Liberal in politics, and was a member of the Methodist Episcopal Church.2 He died May 19, 1904.1 The town of Harley was named after the prominent land owner and politician.

James Harley was born on August 15, 1850 to Archibald and Elizabeth Harley, and was one of ten children. He was married to Annie Madison and was a Liberal in politics. James was a barrister in Brantford and entered the law office of Hardy and Wilkes, working for them for four years. He received a certificate of fitness in 1880 and in 1881 was called to the bar. James Harley lived on the homestead until entering the Collegiate Institute in 1874.2

Archibald was another son of Archibald and Elizabeth. He resided on the homestead as a farmer and remained there after his father’s death.1

The Harley Homestead is a frame home originally sided in clapboard, but now sided in vinyl.4 There is a tall brick chimney on the roof of the middle section, and a chimney used to be present on the right unit that has since been removed. The home has medium pitched gables and flat 6/6 double hung windows. While the main entranceway is now situated in the middle unit on the north side of the house, the home was originally entered through a doorway on the south side.3 The middle unit has a verandah on both sides.

This home is an example of vernacular architecture, being built using whatever affordable resources were available in the area at that time. Because of the availability of resources, the home was built in three sections. The original unit is the section with vertical siding and the white garage door, and it is believed that this structure was built 20 years before the next addition. Over time it has served as a summer kitchen and woodshed. Three of four chimneys used to be present on the roof of the original unit. The middle unit was constructed next and was made of half cut lumber and at one time had 8 doors connecting to the other units and rooms of the home. The last section of the home was built after the middle unit and was constructed entirely of cut lumber. This unit used to have a verandah and entryway facing the road; however, this was replaced by a small enclosed structure sometime in the 1970s. This verandah can be viewed by clicking the link to the right. It had a hip roof and was supported by thin square pillars.3 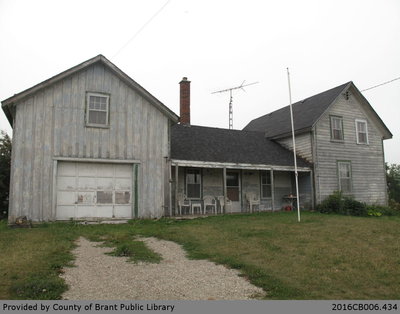