Bow Park Farm is located in the Cainsville area in the County of Brant. It is a 1,000 acre property with a rich history beginning even before the construction of the first home. Around the early 1600s, the property was home to the Neutrals, a race of Indians no longer living. In the mid-1600s, the Iroquois killed and assimilated the Neutrals in the Beaver War. The property then became Iroquois hunting grounds and was later a scene of pioneer settlement. The original home was constructed by R.R. Brown c. 1850, and was purchased in 1866 by George Brown, who is best known for founding The Globe newspaper (later the Toronto Globe, predecessor of The Globe and Mail). In 1869, a fire destroyed the original house that was soon rebuilt by George. George Brown resided at Bow Park Farm until his death in 1880. Afterwards, various farming companies took ownership. Bow Park Farm was the first farm in Brant County to work with hybrid seed corn. The farm was also known for its extensive strawberry farming and has received five silver medals for butterfat and milk production over the years. Special to the property was an oil well that produced its own oil every so often. It is rumored that, at one time, Bow Park Farm served as the headquarters for a German spy ring.1

1866 – The Property was Purchased by George Brown1

That same year a landslide left a jagged ridge and 200 foot yawning precipice.

1869 – A Fire Burned Down the Original House. George Brown Built a new Home in its Place1

The fire did considerable damage to the farm; however everyone was able to escape the burning home.

George had a herd of 330 shorthorns, and the farm eventually became the breeding centre for Clydesdale horses for Western Ontario. At one time, 68 cattle were purchased for 200,000 dollars, this being the most expensive cattle purchase in Canada at that time.

Messrs. Nelson of Edinburgh joined with Mr. Brown to form the company that took over ownership upon George Brown’s death that year.

Shuttleworth and Harris bought the farm from the Nelsons and formed “Bow Park Farm.”3

At the time it was 961 acres and had five dwellings and four barns. Canadian Canners continued to use the property as a farm for pears, cherries, wheat, oats, hay, corn, cattle, sheep and more.

250 people took park in the picnic, and the parade of cars was led by Grand T.J Kirkby.

During WWII, Bow Park Farm was yielding 80% per tomato plant.

Mr. Boersma was a dairy farmer born in Holland from Mount Vernon. George Hertog and Frank Stiger were the shareholders at the time.

George Brown, born in 1818 in Scotland, was a journalist, reform politician, publisher, and farmer. Born to Marianna and politician Peter Brown, George took after his father in many aspects of his political views. Brown is most well-known for founding The Globe newspaper and being a Father of Confederation. In 1837 when George was 18, he left Liverpool with his father and moved to New York. Starting off as an assistant at his father’s dry goods business, George eventually started working for his father’s paper. As Canadian politics were becoming a popular topic among the newspaper, George moved to Canada as an apprentice for his father’s paper and made many political contacts, thus aiding what would soon be a passionate political career. George became a spokesman for the Liberal Party and opposed then Prime Minister John A. Macdonald. Brown’s views were often controversial for the time as he opposed slavery in America and helped to form the Anti-Slavery Society of Canada. Brown also openly opposed the Catholic Church.4

It was said that George Brown’s “happiest days were spent at Bow Park,”1 which he owned from 1866 until his death. George built the main dwelling on the property that still stands today in 1869. In 1880, Brown was shot by an ex-employee of The Globe and died weeks later after poisoning from the bullet. George Brown’s daughters Margaret and Catherine graduated from University of Toronto and were some of the first women to do so. George Brown College was named after Brown.4

While Bow Park Farm has multiple dwellings on the property, this architectural write-up will focus specifically on the main home built by George Brown in 1869. While the home, originally built circa 1850 by R.R. Brown, burnt down in 1869, the George Brown home is thought to have been built in keeping with the structure, layout, and size of the original building.2 The George Brown home is a two storey Colonial style house with a stone foundation and grey side paneling added sometime in the 1960s.2 The main façade of the home is symmetrical with a center cross gable with pediments on both opposing exterior walls. Both pediments have Palladian windows and decorative eave brackets. On three of the exterior walls there are two storey balconies with open verandahs on the main level, supported by round columns. On the exterior of the wall without a balcony, there is an additional walkout on the roof supported by a pediment and rounded columns. All windows are flat in shape with engaged columns as trim. On the main façade are double wooden doors with large side panel windows and transom. The roof is a hipped sleigh roof which, is present on one of the barns and another dwelling on the property and is very rare.2 On this roof are four slightly off center side left and side right chimneys, two on each side of the home, as well as one chimney in the center of the roof. The small hip roof shed is an addition built in 1978, during which the basement that was previously detached from the home was attached and enclosed. The verandahs and balconies were also updated in 1978, and the wood on the interior of the home was stripped to its original pine. At one time, there were steps at the back exterior wall of the home that were used for drive through coaches. These steps have since been removed. 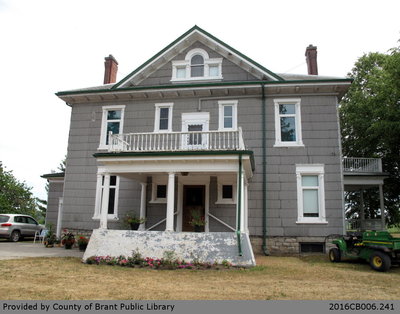