Mystery Question
Do you know when this house was built?
[Please answer by clicking on the Comments tab]
Media Type
Image
Text
Item Type
Photographs
Description

The Emmott farm is located in Newport, and was founded by English settler Moses Emmott sometime in the 1800s. Moses immigrated from Laneshawbridge, England – where the Emmotts were a prominent family – to Newport to help build Cockshutt Road, and ultimately settled on the property after not having sufficient funds to return home. Moses took out a mortgage on the property from Ignatius Cockshutt in 1876. The year that the home was built is unknown but it is presumed to have been constructed sometime after Moses took out the mortgage and prior to the early 1900s. The back units of the home were transported from down the street and added circa 1907.2 In 1909, Fielding Emmott, Moses’s son, purchased the property from Edmond Cockshutt, afterwards which ownership of the farm remained within the Emmott family. In 1925, the Newport Women’s Institute was organized at the home.1 In 1981, Jean and Bill Emmott purchased the property and made renovations to the home. The farm is now a dairy farm with a robotic milking system added in 2015.2

???? – The Emmott Farmhouse was Built

Although it is not certain, it is believed that the two back units of the home were added to the front rectangular unit sometime around this year. The units were brought over from down the street.

1925 – The Newport Women’s Institute was organized at the Emmott Farm, in part, by Mary Campbell1

1979 –A New Milking Parlour and Milk House were Constructed2

Moses Emmott emigrated from Laneshawbridge, England to help build Cockshutt Road to Port Dover. The Emmott family was well-known in the Laneshawbridge area, and were relatives to the early owners of Emmott Hall, a country house located in the town. Moses was supposed to return to England once the road was finished, but not having enough funds for the trip home he settled in Newport. Moses Emmott married Caroline Harrison (1823-1905) had eight children. He built the home that is beside the Emmott’s white frame house.2

Warne Emmott was the son of Harry Emmott, and purchased the Emmott farm in 1949. In 1942, Warne was the winner of a livestock judging competition and in 1943 he won the county public speaking competition. In the 1980s, Warne served as the Brantford township reeve, county councillor, and warden.3

The main house on the Emmott farm is a small, 1 ½ storey white frame home with an exterior made of horizontal planks of wood. The home now has a T-shaped plan, but originally only consisted of the front rectangular unit. The two back units were added early on in the homes history but the exact timeframe is unknown. The front of the home is symmetrical with a flat structured centre door on the main façade and one flat window on either side of the door. The enclosed entryway underneath the verandah to the side of the main door was added during Jean and Bill’s residency. Also at the front of the home is a hip roof verandah with a white fence, supported by square columns. On one of the side walls of the middle unit of the home is a dormer window. At the back of this unit is a tall, off centre brick chimney. A smaller centred chimney is visible on the roof of the back unit. There is one original barn on the property that can be seen by clicking the link on the right. 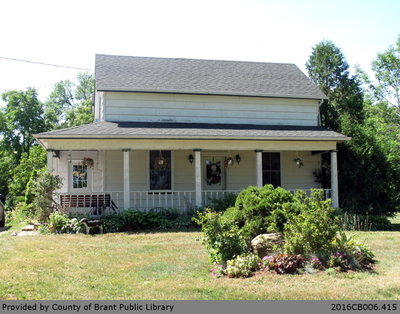