Originally, the land the home is situated on was part of the Ellis Farm. Richard Tennant purchased one acre of the property from Henry Ellis and built the three storey home that was then purchased by Colonel James Knight Goold after Richard’s death in 1878. Afterwards, the Tennant house was home to the Royal Canadian Legion and Heritage Inn Restaurant, and is currently owned by Scape Spa. The construction of the Tennant house took eight years, and the outside of the home was originally finished with grey cement made from water lime concrete. The concrete material came on ships from Scotland and was unloaded off of the Grand River at Newport.1

The building has eight gables, eight bedrooms, and features a lantern observation on the roof. Many of the homes original architectural features have been altered or removed, and a back addition has also been constructed.

c. 1840-48 – Richard Purchased the Land from Henry Ellis and Construction of the Octagon Shaped Home and a Matching Barn Began1

Richard Tennant purchased one acre of land from Henry Ellis, and another parcel was sold to Henry Yeoward. Richard then started the construction of the octagonal house that ultimately took eight years to build. The structure was the third of its shape to be built in the area, and the barn on the property has since been removed.1

After Richards’s death that year, Caroline had ownership of the home and sold it to Colonel James Knight Goold, an officer in the British Army. Goold had been a guest at the home while pursuing military duties in Mount Pleasant and had said he wanted to retire there. He retired in 1883 and died in 1915. It was said that on warm days he could be seen sitting out on the piazza.1 In James' will, he left his granddaughter, Lillian V. Goold, the use of the Tennant house for six months after his passing along with four hundred dollars to account for living expenses.5

???? – Owned by the Mr. Mueller and Operated as the Heritage Inn Restaurant2

Richard Tennant was born in 1825 in Yorkshire England. Sometime around the year 1838, Richard and his brother John Tennant immigrated to Canada. A shoe and boot maker by trade, Richard Tennant owned his own shop in town. Richard married Caroline Heaton (also originally from Yorkshire) and together had a son named William Tennant in 1850. Caroline’s sister Alice Heaton married John Stowe, and the couple built Stowe Brother’s Carriage Shop, one of the other octagonal buildings situated in Mount Pleasant at the time. It is believed that the Tennant and Heaton family were, in large part, responsible for the increase in English immigration to the Mount Pleasant area during the 1840s and 1850s.1

Richard died in 1878 at the young age of 53 and was buried in the All Saints Anglican Church Cemetery. He left the Tennant house to his wife Caroline.1

The Tennant house is a Neo-Gothic style octagon building, the only one of three octagon structures still standing in Mount Pleasant. The unique octagon shape was inspired by the work of American architect Orson Fowler, who believed that homes of this shape were easier to cool down in the summer and warm in the winter.3 Fowler also believed that the openness of the shape provided health benefits and warded off evil. Despite these supposed benefits, Albert Goold (son of previous owner James Goold) stated that the house was extremely cold in the winter and that all of the fireplaces had to be blasted in order to keep it warm.1

The home was originally finished with grey cement and consists of three storeys: a ground floor, first floor, and second floor. The ground floor, although somewhat below ground, had six large windows and two doors facing east and west that allowed for ample light to enter the space. It contained a kitchen, wine cellar, and maid’s quarters. The main floor consisted of “formal public rooms” and two fireplaces, one of which is still present in the building. This floor housed a parlor room and the main entranceway. Half of the third floor was unfinished, and otherwise had three pie-shaped bedrooms at the gables. In total, the house had eight bedrooms. All floors were connected by a spiral stairway. One of the homes main features was a verandah, supported by round columns that wrapped around the house with stairs located near the main entrance.1

The Neo-Gothic features present on the house include centre pointed windows on the second storey, finials on top of eight high pitched gables, and large windows with slightly triangular shaped trim on the main floor. The home used to have decorative bargeboard trim that has since been removed along with many other original details. The windows used to be 6/6 and divided by a mullion. These original features are present in a photograph from The Work of Our Hands, which can be viewed by clicking the link on the right. To the left of the main entrance is now a doorway with a walkout balcony that has replaced one of the large windows. The original tower is still present in the centre of the home’s roof, although changes have been made. The tower used to have two brick chimneys on its roof. 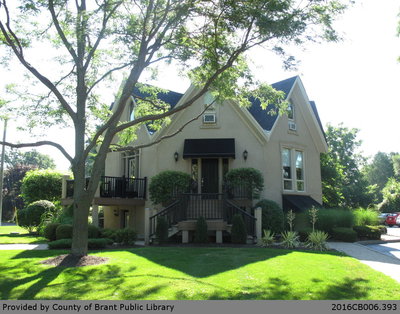