The Fairfield Plains United Church (originally named Fairfield Methodist Church) is located in the Burford Township. The land was purchased in 1838, with its original intended use to be a burial ground. A frame church was erected in 1839 and this building was sold and removed to be replaced with a yellow brick church in 1868. In the church’s early years, it was grouped with other congregations in a circuit. The first Revered was Peter German, and the first Recording Steward was Russel Smith, a prominent farmer in the Fairfield Plains area. From 1951 onwards, the church underwent many changes to keep its appearance updated; including painting of the interior and exterior, the addition of carpeted floors, and the addition of the belfry that still stands in front of the main entranceway today. The Fairfield United Plains Church has been the starting point for many organizations including the Women’s Association, the Berean Friends, J.O.Y Class, and Mission Band to name a few. Although the church has been closed for many years now, its members continue to take care of the building and grounds, and the space is used for certain meetings and events.1

The land now used for the church was purchased originally for the purpose of burying grounds. Acting on behalf of the Wesleyan Methodist Church in Canada, Johnathan Freeman, Joseph Dutcher, Henry Dutcher, William M. Whitehead and James Wilson bought the land.

1864 – Fairfield was Part of the Mount Pleasant Circuit1

German lead six churches: Fairfield, Claremont (later called Burford), Northfield, Bethel, Harley, and Victoria. The average salary paid to Reverends and Stewards was $240, and overall funding given for services was $588.50.

The land was sold to C.D. Smith and repurchased the very same day in order to change a condition in the land agreement and build the new church. The church cost $4,000 and it is believed that the structure was built by William Mellish, a Brantford architect.2

1875 – The Circuit was Reduced to Burford, Fairfield, and Victoria1

1896 – The First Legacy was Received. The Ladies Aid Group was Organized1

In 1925 the Ladies Aid was renamed as the Women’s Association.

1914 – The Church Celebrated its 75th Anniversary1

1918 – The Burford Circuit was Formed and Consisted of Bethel, Fairfield, and Burford1

1931 – An Adult Bible Class and Sunday School Were Organized1

The groups provided financial help for the church.

1951 – The Exterior and Interior of the Church Were Painted1

1971 – The Church Entrance was Built After a Donation From Mr. and Mrs. Sidney Potter1

The Fairfield Plains United Church is a single detached rectangular, yellow brick building with a fieldstone foundation. The church was built in 1868, presumably by William Mellish, and the front protruding entryway was built in 1971. The church has Italianate brickwork with swags underneath the gable on the front of the building. Also common of Italianate buildings are the hooded, arched Roman windows that feature stain glass.2 The building has a symmetrical layout and the main entrance is on the gable façade. On the back wall of the building, there is an off-center engaged chimney.

All windows on the building have a semi-circular opening structure. The main façade has windows with decorative wooden tracery, and a centered round rose window is present. Above this rose window is a stone plaque commemorating teachers and students of Burford School No. 15 year 1855 to 1964.2 The main doorway is flat with double doors, flat side panels, and a semi-elliptical transom. In 1951, the interior and exterior of the building was painted, and carpet was added in 1977. The belfry (or wooden bell tower) was built in 1979, and the bell was donated ten years later by the Fairfield School.1 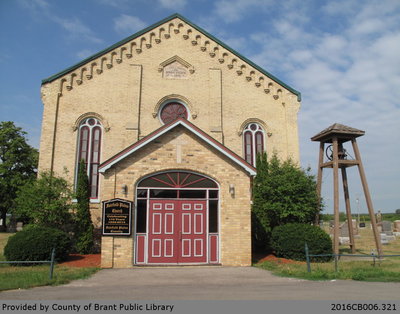