The St. James Anglican Church is the oldest standing church in Paris, Ontario and the oldest cobblestone church in Canada. In the years before the church was built, Paris settler Charles Dickson wrote a letter to his mother residing in Scotland, expressing that Paris was in need of an Anglican church. Charles’ mother showed the letter to Reverend Daniel Baget of the St. James Anglican Church in Edinburgh, who then showed the letter to a visiting minister from Ireland. This minister preached a sermon of need raising 200 dollars for an Anglican church in Paris. In 1837, another request for funding was sent to the Duchess of Leeds and 300 dollars was contributed. It was these funds and land given by Hiram Capron that allowed for St. James Anglican Church to finally be constructed by Levi Boughton in 1839. Over the years, many additions have been built including the fieldstone addition for the chancel in 1863, the redbrick parish hall in 1913, and a stone entranceway in 1992. The church is representative of Canadian Gothic architecture of the 1800s.2

1839 –The Land for the Church was Given by Hiram Capron on January 2nd of That Year. The Church was Constructed by Levi Boughton1

William Morse began his service as the first regular minister of the church that year. He finished his service in 1848.

1857 – The Church Became a Parish in the Diocese of Huron2

1863 – The Fieldstone Addition was Constructed That now Houses the Chancel. The Basement of the Church Began Being Used for Sunday School as Reverend Townley had Intended2

By 1880 there was an average of 100 people attending the Sunday school.

1872 – The Church was Officially Consecrated. The Gallery was Removed and the Center Isle was Added2

1876 – Mr. Townley Purchased Land from Banfield Capron for $450 to be Used for the Cemetery1

1912 – The Northeast Corner was Badly Shattered by Lightning, Burning all Fuses at the Church2

1913 – The Redbrick Parish Hall was Added and Officially Opened by Bishop Williams. That Same Year, the Women’s Guild was Organized to Pay off the Church’s $8,999 Mortgage2

The committee was led by Mrs. Purton. Successful garden parties and teas were held, and the mortgage was paid by 1932.

1963 – Another Addition was Built and Opened by Reverend N. Huxton2

1974 – The Paris Cooperative Preschool Operated at the Church1

St. James Anglican Church is one of the cobblestone buildings of Paris, Ontario. During its construction, a mixture of water rounded river stones and field stones, believed to have been collected from the hill overlooking Willow Street,2 were laid crosswise with their ends sticking out. It is evident that the stones of this building were not sized quite as carefully as were the other cobblestones. The corners of the church have stone quoins and the building sits on a stone foundation. St. James is exemplary of 1800s Canadian Gothic architecture which is easily identifiable by looking at the Carpenters Gothic windows.2 The windows have a pointed shape, some having decorative wooden tracery and some having stain glass. Another Gothic feature is the rose window sitting above the doorway that was covered over by wood in the same year the beamed ceiling was replaced.

St. James Anglican Church has many additions that have been constructed over the years. The original building, called the nave, was constructed in 1839 and is thought to be heavily based off of work by architect James Gibbs.2 The fieldstone chancel was built afterwards in 1863, and marks a change in the Gothic style that occurred between the construction of the two units.2 The redbrick parish hall with door paneling was added in 1913, followed by the addition of the stone entryway in 1992. Over the entrance is a church steeple with features commonly seen on Canadian country churches.2 The bell tower is octagonal with a tin covered spire and finial on top. The trim has returning eaves and sloping soffits. The front door of the church is artificial grain, and the door of the vestibule has a Gothic frame, matching that of the windows.

While the exterior of St. James Anglican Church is valuable within a Canadian architectural context, the interior has many interesting features as well. What used to be a unique wooden beamed roof was replaced by the construction of a false ceiling sometime early on in the church’s history. A small window and pew is present in the stone addition that was intended to be used for lepers, although it is believed that neither of these features was ever actually used. In 1910, an extravagant solid brass altar was donated by Peter Cox that replaced the original altar. The interior also features a Fleur-de-lis, and candelabre mark the stairs to the chancel. The ornate pews are original and constructed of oak. 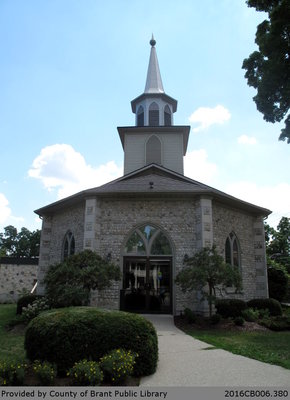