The Russel Smith house, located in the Burford Township, is situated on property once owned by prominent farmer, Russel Smith. The original home, built circa 1835, burned down and a white brick Gothic Revival home was built in its place circa 1850. Russel Smith was a mixed farmer and began operating a vineyard on the property around 1860. Also around this time, Smith severed the land next door for his son Charles Douglas Smith.4 Not much is known about the ownership after Mr. Smith.

184? – The Original Home on Russel Smith's Property Burned Down and was Rebuilt4

186? – The Land Next Door was Severed and Given to Russel’s Son, Charles Douglas Smith3

This property still has the yellow brick home that was built at the time for Charles.

His wife Margaret passed away the following year, and it is presumed that they owned the property until this time.

Russel Smith was born on June 4, 1812. Originally from Ancaster, Mr. Smith came to Burford in April of 1833 to farm with his brother, John Smith. The two are the original settlers of the Fairfield Plains area. Initially, they engaged in mixed farming, and later John switched to specialized dairy breeding.2 He was the son of William and Charity Smith, and brother to nine other siblings. Russel married Elizabeth Taylor on March 12, 1835 and had one son named William T. Smith in 1837. Elizabeth died one week after the birth of William, and Russel was remarried to Margaret B. on May 1, 1838. Together the couple had seven children. In 1846, Russel helped Colonel Whitehead lay out the Bethel area. Russel owned many lots of land in the Fairfield Plains area including the land that now belongs to the Fairfield Plains United Church. Smith was a member of Fairfield Plains United Church for over 53 years, serving as Circuit Steward for 45 years, and also served as justice of the peace in the County of Brant for over 30 years. Smith was a lifelong reformer, as were many of his family members. Russel Smith built the current house on Maple Avenue South circa 1850, and on this property, he operated a vineyard that produced pure fruity non-alcoholic wine. It is estimated that Mr. Smith produced 9,000-20,000 gallons of wine per year.1 Sometime around the year 1860, Russel severed land next door to his property to give to his son Charles Douglas Smith on which a yellow brick home was built. In 1883, Russel Smith was recorded as owning 200 acres of land, 7 acres of which were a grape vineyard. Russel Smith died in 1887, and his wife Margaret the following year, meaning that Russel and his wife resided in the home until sometime between 1883 and 1888.

The Russel Smith house is a 1½ storey white brick Gothic Revival home.3 The house was built circa 1850 and has a T-shaped plan with a front rectangular unit and an attached back unit. The front of the home has a bay window and two dormers on the roof. There is also one dormer on each wall of the sides of the home, both with gables with overhang matching those on the front entrance way. All main windows have semi-circular transoms and are double hung. Underneath the front gable is a small round window. The main door is centered and underneath an open verandah stretching more than halfway across the façade, and is supported by square columns. The door is flat in shape with flat transom and sidelights. This front layout of the home is asymmetrical. The trim on the roof features a thick fascia and deep overhanging eaves. The back entrance to the home also has a verandah with a pediment. A hip roof bay window is present on one of the side walls, and features flat, multi-paned windows. 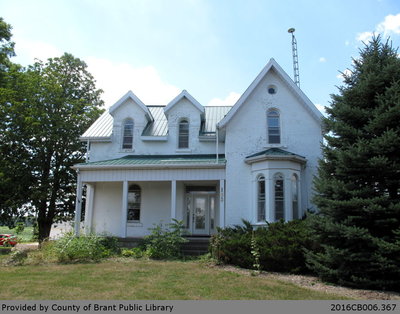