After the formation of a committee to find a site for a town hall, the Old Town Hall in Paris was built on Burwell Street in 1853 by Scotland-born architect John Maxwell. The building, renowned for its gothic architecture, is the first of the civic kind to be built in this style in Canada. A feature unique to the building is the beamed ceiling in the assembly hall on the second floor. In 2006, this space was chosen because of its architecture, to film a scene for the movie Closing the Ring.4

Originally, the basement was used as a space for jail cells and part of the market that mainly operated on the ground floor. Offices for councillors of the Town Hall were also present on the ground floor. The second floor was used as an assembly room that later became an Opera House where Parisians would go for entertainment for many years in the early 1900’s. In 1917, the Old Town Hall was purchased by Charles and Chester Wheeler and became the Wheeler Needle Works factory. Years later in 1954, the factory was sold to Mary Maxim and additions to the back of the building were added for the company’s operation. In 1984, Mary Maxim moved out of Old Town Hall and was replaced by Old Town Hall Auctions. In 2008, the owner of Old Town Hall Auctions put the building up for sale.4 The building was purchased in 2016 by the County of Brant after receiving a million dollar donation from Degrassi producer Linda Schuyler.

1853 – A Committee was Formed on February 7 to Find a Site for a Town Hall. Construction Began1

Lot 7 and half of number 6 were decided upon by the committee as the new property for a Town Hall. Architect John Maxwell and contractors Gardner and Strickland were hired. The building cost $12,000.1

Anthems were sung to raise money for the poor.4

1885 – Constable Randall Found a Prisoner Left in a Jail Cell3

After complaints of hearing noises below the town clerk’s office, Constable Randall checked the jail and found a prisoner who was left for three days without food or water. The Constable gave him a meal after which the man left.3

Town Council moved in order to have a more central location as after the great fire, many businesses and buildings moved to Upper Paris.2

Entertainers performed at the Opera House Throughout 1901. Their acts are as follows:

March: On March 7 and 8 there was a program presented at the Town Hall that included illustrated songs, selections from leading bands of England and the United States, and scenes in motion pictures.

March: I.C.B.U vocal and instrumental entertainment and a lecture by Rev. J.E. Crinion called “My Trip to Rome; via London, Paris and the Exposition” was performed.

October: Mr. Will H. Buckley put on a series of five concerts at the Town Hall. Tickets for the series were sold at $1.

April 4: A comic operetta entitled “A Merry Company” performed at the Town Hall under the auspices of St. James Church.

October 20: The Colonial Moving Picture Company appeared at the Opera House and presented the series “Coronation of King Edward VII” and “Jack and the Bean Stalk.” Seats were on sale at Mr. Fisher’s book store.

March: Mark Bros. No. A-1 company presented “An Exile of Erin,” “An Irish American Gent,” “East Lynne,” “A Parisian Princess,” “Paradise Regained,” and “Larry Brogan’s Promotion.” Grand prizes were drawn for and were on exhibition at Chalmers and Co’s furniture store.

May 16: The Virginia Minstrels played at the Opera House and featured local talent.

September: The Opera House is renovated and opens for the season with A.Q. Scammon’s famous play “Side Tracked.”

June 1: “Jerry from Kerry” from the company Patton and Perry performed at the Opera House.

Oct: Edward Denton’s Real Coon Company appeared at the Opera House. Harry Vou Tilzer’s songs were sung and a cake walk was part of the performance. African American singers and comedians were featured performers. Tickets were on sale at Armitage’s drug store.

May: “The King of Tramps,” a comedy act, performed at the Opera House.

September 27: The comedy “The Little Princess” produced by the Irving Dramatic Club performed at the Opera House.

September: “The Villiage Carnival” was held on September 3, 4, and 5 at the Old Town Hall. $250 was donated to the Sick Kids Foundation.

Feb 18 and 19: “Thomas A. Edison Kintephone Company Incorporated Taking Pictures” were at the Opera House.

1915 – A Meeting was Held About Old Town Hall’s Basement Being Converted for Manufacturing Artillery Shells.

A meeting was held to consider the application of the G.W. McFarlane Engineering Co. for converting the basement of the town hall for the manufacture of shells. It was later approved and 35-60 men were employed.4

The company was a specialty needle manufacturer serving the textile industry started by Chester Wheeler’s father. Chester was involved with the Paris Lion’s Club and responsible for the renovation of several downtown properties.5 At the beginning of World War I, Artillery shells were manufactured and sent to France at Old Town Hall.4

1945 – A Fire Occurred at Needleworks Factory4

A fire in the basement of Old Town Hall (what was then Needleworks Factory) lasted for 2 hours after being put out by Fire Chief Mort Hawley and his crew. The cause of the fire was unknown.

Mountings on the bell broke and the bell was silenced for the first time after a safety inspection. The bell was only ever rung again in 1956 and once in 1967 at Paris’ centennials.

An addition was added and the top floor was used for Mary Maxim offices, while the ground floor served as a show room.4

The zoning change permitted Paris antique dealer, Stanislaw Obradovic, to operate a flea market. Obradovic was attempting to finance a $100,000 restoration of Town Hall with the profits from the market.4

The Old Town Hall was used as an auction hall.

The Old Town Hall, apparently scouted for its architecture, was used in the film Closing the Ring featuring Shirley MacClaine and directed by Richard Attenborough. What used to be the assembly room on the second floor was transformed into a dance hall in Belfast Ireland circa 1941. A brick wall was built outside of the Town Hall to resemble an old alleyway for another scene that was shot.4

In December 2015 the County of Brant received a million dollar donation from Degrassi producer Linda Schuyler to purchase the building.

The Old Town Hall is a unique example of medieval Gothic architecture with certain Tudor Gothic motifs. While Ancient Greek and Roman architecture was typical of civic buildings in the 1850s, Gothic architecture was mainly reserved for Churches of the time. The Old Town Hall was the first civic building in Canada to be constructed and designed in this style, making it a nationally and internationally significant building. In its historical context, the Town Hall was inspired by the Houses of Parliament in London circa 1840, and pre—dated Ottawa’s Gothic style Parliament buildings from 1859. It is thought that this is due to upper-class settlers of Paris wanting to mimic elements of British Society. The similarities to prior buildings in London and the abandonment of romantic 18th century Gothicism for medieval also suggest that John Maxwell was aware of British trends on Gothic Architecture. The Gothic style of Old Town Hall within its local context proves to be distinguishing from the homes of the former mill owners that were constructed as Greek Revival mansions.1

Exterior: The Old Town Hall is a two and a half storey building with a rectangular plan with north and south wings. The height of the single tower at the northwest angle is reminiscent of Italian Gothic architecture and features a hipped roof. The roof on the main unit and wings are high gables well suited for Upper Canadian climate. The octagonal clasping buttresses at the sides of the wings and tower can also be found on the London Houses of Parliament. In the late 19th century these buttresses were topped with crenellated turrets. On the front façade of the building are stepped angled buttresses topped with stone pinnacles and weathering’s on either side. The doorways and main windows are pointed and articulated by moulded brick. The three-light perpendicular windows display decorative wooden tracery common of Gothic style architecture. The exterior brickwork is Flemish bond with stone dressings. The walls are up to 42 inches thick.4

Interior: The partial basement was used for the “lower market” on the eastern side and prisoner cells consisting of one communal cell and two smaller cells on the western third. Square wooden columns divide the eastern two thirds of the basement into six equal isles. The eastern side of the market could be entered through a four-centred brick arch at the east end of the building. The ground floor is also divided by wooden columns into three aisles and originally served as the Market Hall. On the west end of the ground floor were the council chamber, Magistrates, and Treasurers offices. The treasurer’s office was attached to the east end of the doorway to the tower through the vault. The stairs are located in the north wing, and run from the ground floor to the hall. Originally there were two stairways leading up to the assembly room, however one was removed to make room for an elevator that was ultimately never approved.4 The main floor was used as an assembly room and then Opera House, and featured an open-timber roof similar to that of the original London Guildhall circa 1411-1440. Braces form a pointed arch under a tie beam. The principal rafters and struts feature tracery similar to St. Mary’s Church’s roof in Adderbury. Although the council offices on the ground floor were plastered, the brickwork in the basement remains unchanged. 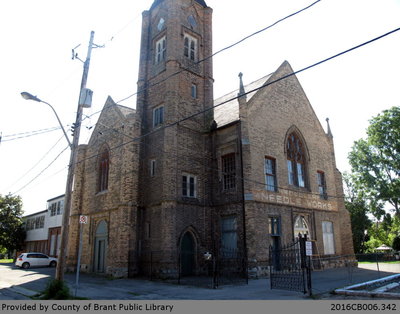