The Arlington Hotel is a Chateau and Romanesque style building, well-known for its prominent presence in downtown Paris, Ontario. The Arlington has operated as a hotel since its construction circa 1850. Originally a plaster building, the yellow-brick unit was added by Mr. Ealand in 1882. It is believed that Hiram Capron purchased the land and had the plaster hotel built, and then rented out the property to various hotel owners.4 Orrin D. Bradford, an immigrant from Pennsylvania and well-known man in Paris at the time, rented the hotel along with others in the downtown area. He officially purchased the Arlington in 1866. In the late 1800s and early 1900s, the dining room was known as one of the main social centres of downtown Paris. In these early years, traveling salesmen were the hotels most frequent patrons, being transported by Buses to and from the Arlington and Paris Junction Station.2 While its ownership has changed several times over the years, members of the Ealand family have owned the building at two separate times from 1882-1901 and again from 1925-1962. Renovations to the hotel have taken place many times throughout the buildings history.3

This building is designated under the Ontario Heritage Act.

The hotel was made from Plaster of Paris. It is believed that the hotel was built by Hiram Capron, and rented by various hotel managers.4

After years of renting the Arlington, Pennsylvanian immigrant O.D. Bradford bought the hotel and it was known as Bradford House. Renovations were made and the hotel was reopened in 1867. Entertainment was hosted Wednesday, Friday, and Saturday nights.

Mr. Ealand wanted to open a spa using the sulphur spring on Distillery Hill. He purchased the east slope of the Nith River, part of the Capron Estate, and named the springs Arlington Park. The water from the springs was pumped to the hotel and the spa operated smoothly for some time. The water eventually turned brown from rust and the idea was discontinued.3 Ealand wanted to add a park for entertaining guests. He also added the yellow brick extension to the hotel.2

1901 – Mr. Ealand Died and the Hotel was Leased to Mr. Cornish, William Lavoie, and the Barnett Brothers

1906 – The Hotel was Leased to Former Commercial Traveller, Frank Babcock3

1912 – A Horse Crashed into the Fence and Landed in Arlington Yard. A Man Named Mr. Thompson Sustained Minor Injuries2

1913 – A Movie House was Located in the Arlington Park Theatre2

The theatre had seating for 600 people.

The Prohibition Threatened Hotels in the Area.3

The government prohibited the sale of alcohol, giving patrons less incentive to give hotels their business. The creation of highways was also a threatening factor occurring at the time, as travelling far distances was made easier.3

1940 – A Farewell Chaired by Mayor J.P. McCammon was Held at the Hotel for the First Group of Paris Soldiers Heading off to Fight in WWII3

After Eva’s death, her nephew Herbert took over the operation of the Arlington until 1962.

Ferguson was a Councillor in Paris and renovated the hotel.3

1974 – Barry Walker Completed an Inspection of the Arlington, and Noted That the South Wall was Showing Signs of Failure3

Part of William Street was barricaded until renovations were complete in order to keep pedestrians safe.3

After an attempt at renovating, Parker sold the hotel to Athanasios Soliriow later that year. During Parker’s operation of the hotel, only the dining area was used. The upper floors of the hotel remained empty.

Under Anthanasios Soliriow’s management, the exterior bricks of the Arlington were painted white, and the trim black. The building was renamed “Grand Paris Castle” and was a rock and roll bar and strip joint.

1988 – The Hotel was Sold to Brothers Joe and John Skupnik

1990 – The Skupnik Brothers Completed Renovations. The Hotel was Recognized as an Ontario Heritage Site3

The white paint was carefully removed from the exterior brick. The renovations amounted to $60,000.

The Arlington Hotel is a four storey, rectangular stucco and yellow brick building with 24 rooms. The original building was made from the Plaster of Paris, and still stands on the left side of the Scottish bond brick addition that was added by the Ealand’s in 1882. The size of the original building is best seen from the back of the Arlington. The Arlington Hotel is a good example of Chateauesque architecture because of its steeply pitched gable roof, octagonal tower, and multiple dormers. The arcades are reminiscent of Romanesque style, and feature round half-columns of red and brown marble that serve as supports for the arches. The main door is surmounted by the semi-circular arches, and has a flat opening structure. It is off center on the gable façade. The doors on the upper levels feature balconies and have semi-circular and flat transoms. Similar to these doors, most of the windows are semi-circular with some being flat. All have a sash and are double hung with slip sills. Above the windows and additional doors are arch radiating voussiors. The many dormers on the roof have gables with overhangs. 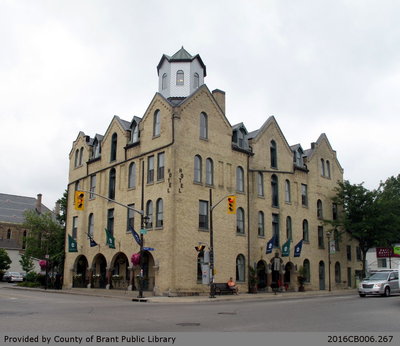