Located in St. George, the William B. Wood house was built in 1880 for local businessman Mr. Thompson. The home was soon after purchased by Snowball Grist Mill owner William Bruce Wood, who served on the South Dumfries and Brant County councils, and at one time was the mayor of Brantford.5 The back of the home used to serve as a butcher shop in 1907.2 Today, the William B. Wood house is the location for Two Roses Bed and Breakfast. This redbrick Victorian home has extravagant bay windows and decorative front and side verandahs.

Construction began and the house took two years to complete.

1880 – Construction of William B. Wood House was Finished, and the Home was Sold to Mr. William Bruce Wood1

1907 – James Didmon Restored the William B. Wood House and Opened a Butcher Shop in a Detached Building West of the House1

190? – The Malcolm Family Purchased the Home2

The Malcolm family also owned the St. George creamery and the cheese factory. It was J.D Malcolm, one of the sons of the owner John H. Malcolm, who resided in the William B. Wood house.7

1911 - Part of the Property was Rented From J.D Malcolm and Used as a Green for the Lawn Bowling Club7

The Nesbit family were the home’s longest residents and stayed for over 50 years.2

The William B. Wood House was opened as a bed and breakfast called Two Roses. The name was created because both Rene and Jose’s mother’s names were Rose.2

William began his career in the milling industry in 1870 when he owned a mill in Brantford with his brothers D.B. and T.L. He became a Township Councillor in 1881, then a member of the Brant County Council. He was elected as a Liberal member for North Brant in the Ontario house in 1886, and retained his seat until 1895 when he resigned due to overwork. He then became the Registrar of Deeds for the County of Brant, and served as Mayor of Brantford from 1909-1910. His brother, David Beattie, also served as the mayor at one time. He moved to Montreal to establish the headquarters of Dominion Flower Mills Ltd. William Bruce Wood died in 1928 in Montreal.5

The William B. Wood House is a two storey redbrick Italianate home. The home has round headed windows, decorative moulding on the verandah’s trim, and bay windows, all classic features of the Victorian era. Also common of this architectural style is the hipped, low-pitched roof with deep over-hanging eaves. The brickwork is Flemish bond, and present on the corners of the home are prominent alternating yellow quoins. The windows on the main façade are a rounded shape with rounded stone trim above, and there are flat shaped windows with arch radiating voussoirs on the sides of the home. The windows are 2 sash with mullion. The façade has a center door with a semi-circular transom, and a tower of bay windows with a verandah and balcony for the second storey that features a mansard roof. The home has hooded windows and paired roof brackets.6 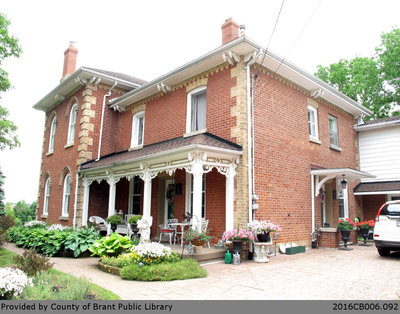