Located in Paris, Ontario, the Barker house is a cobblestone home built circa 1842. This Ontario Regency Cottage was built on land that exchanged hands from the Indians, to the Crown, to Thomas Gadd. Circa 1840, Gadd severed 75 acres for his daughter Elizabeth and her husband James Bilton Barker on which the Barker house was built.2 After Elizabeth and James’ death, their son Bilton Barker and wife Margaret purchased the Barker house. Upon the passing of Margaret, the home was then purchased by the Lucks.3 The Barker House is a unique building in the cobblestone collection of Paris as it is the only cobblestone that was built for a working class citizen, which is evident in the imperfect cobblestone rows and the use of crude quoins.2

1885 – Bilton and Margaret Purchased the Home1

After the passing of James and Elizabeth, their son Bilton and his wife Margaret bought the property.

c. 1922 – Charles Luck and his Family Purchased the Property from Margaret. The Property was Then Known as Luck’s Farm1

The Luck family had emigrated from Paisley Scotland.4

c. 1969 – The Barker House was Owned and Exchanged by Various Other Residents3

James Bilton Barker was born circa 1807. Moving from Lincolnshire, England to Paris, Ontario sometime in the 1820s, Barker was one of Paris’ earlier settlers. He married Elizabeth Frances Gadd and together they had nine children.3 Around the year 1830, James Barker opened a blacksmith shop near the west side corner of William Street and Broadway Street West.2 Circa 1840, Elizabeth’s father Thomas Gadd severed 75 acres of land on which the Barker House was built. The property was also used as farmland by James.3

James was an advocate of the prohibition, member of the Methodist Church, and life-long conservative. He died in 1885, three years after the death of his wife Elizabeth.3

The Barker house is a one-storey Ontario regency cottage. All four exterior walls feature cobblestone veneer, which was more expensive and therefore, rare for its time. The cobblestones used for the exterior were gathered locally along the Grand River.3 As the house was built on the side of a hill, this allowed for a basement walkout level. In order to support the hill, a dry-stone retaining wall was built.1 The home has a field stone foundation and rough limestone quoins.

The Barker house is a single detached home with a rectangular plan and hipped roof. The façade has a symmetrical layout with flat windows with wooden sills and lintels, and French arches.3 At some time, smaller windows were put in place of the original windows, and the gaps that were created as a result were filled with new cobblestone.4 The main door is recessed with a five paned fan light transom, and a rounded arch above the door made from elongated cobblestone. In keeping with the symmetrical plan, the home has two center side right and side left chimneys. It is believed that the foundation of the home may have originally had an opening for a coal chute.4 Having been abandoned for a number of years, the Barker home is now under new ownership and renovations are currently underway. 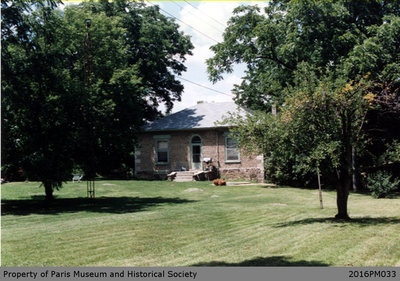