The Hamilton house, located in what used to be the Township of Onondaga, is believed to have been built in 1853 for Squire McNaughton, a Judge in Onondaga.3 The house was soon after purchased by Alexander Young Hamilton and has remained in the Hamilton family’s ownership ever since. Ownership of the farm passed on to John Hamilton, son of Alexander Young Hamilton, and was then purchased by Alexander M. Hamilton in 1898. Sometime in the early 1900s, Fred Hamilton purchased the property, and in 1969 his daughter and son-in-law, Norma and James, bought the home. Early on, the Hamilton’s built the two original barns that are still in use on the property, although the exact year is unknown. The home is a redbrick house with decorative brickwork using bricks that were made on site, and a back unit and garage were built sometime during Alexander M. Hamilton’s residency.1 In 1883 the land was recorded to be 90 acres.2

1853 – Built for “Squire McNaughton,” a Judge From Onondaga3

1875 – John Hamilton, Alexander's son, Became the Owner of the Home1

1898 – Alexander M. Hamilton Became the Owner of the Home1

Alexander M. Hamilton was John Hamilton's son. During his residency, the back part of the home was constructed.1

Norma and James were the daughter and son-in-law of Fred, and the fifth generation of Hamilton’s to live on the property.1

John M. Hamilton was a farmer in Onondaga Township, born July 5, 1843. John M. Hamilton was son of Alexander and Isabelle Hamilton, originally from Scotland. In 1866 he married Margaret and had three children: Jane Isabella, Nettie Brownlie, and Alexander Malcolm. Margaret died in 1875, the year he purchased the Hamilton house from his parents. In 1883, it was recorded that while living on the farm, John Hamilton owned 90 acres of land. This land was later passed on to his son Alexander Malcolm in 1898.2

The Hamilton house is a single detached, two-storey redbrick home located on a century farm. The most remarkable architectural features involve the decorative brickwork on the main façade. Yellow buff brick quoins are present on the corners of the façade, as well as a decorative yellow brick ledge separating the bottom and top storey windows. The two main windows on the first floor feature recessed yellow brickwork, and the top three windows have yellow brick arch radiating voussoirs. The home is three bricks thick and the brickwork is Flemish bond. It is believed that the bricks used for the main unit of the home were manufactured on site at the farm.1

Originally, the home had a rectangular plan, but became a T-shape when the back unit and the garage were added sometime after 1898.1 This back unit features an open verandah by the side entryway. The home has a low pitched hipped roof with an off center side right chimney, and beautiful decorative eave brackets. All windows on the main section of the home are double hung segmental windows with 6/6 paneling. The main entrance features a flat door with flush light side panels and a covered transom.

The two barns on the property are originals that were built by the earlier generations of the Hamilton family and are still in use today.1 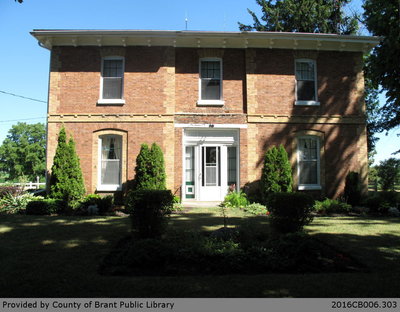