The Howlett House is located in Glen Morris within the Township of South Dumfries. Prior to 1897, Robert Rose, the donor of the land for the Glen Morris Public Library, owned a barn and stable on the property of the Howlett House. Circa 1915, Josiah James Howlett (commonly known as J.J. Howlett), bought the property and built a home on the foundation of the original barn and also constructed a shop. After J.J’s death in 1931 and the stock market crash, ownership passed from J.J’s second wife, Isabella Wallace, to his son, William Howlett. There lived J.J's other son Albert's family and Isabella until Mrs. Trotter purchased the home.6 In 1953, the Howlett house was purchased by the Baird family. The home had no electricity or plumbing until 1939, and well water was carried to the house daily from the school house down the street.1

Robert Rose owned the property that the Howlett House is now on. The land had the original barn and stable for cattle and holding grain.2

c. 1915 – The Howlett Home was Built by Josiah James Howlett

Josiah James Howlett purchased the property from Thomas Scott, who had an old barn and shop on the land. J.J built the Howlett House around 1915 using the material from the other buildings on the property.3 J.J also built a garage/workshop on the property. His sons, Albert George Howlett and William Howlett, grew up in the home as did Albert's three grandsons. The house was built on the foundation of the old barn previously owned by Robert Rose and later, Thomas Scott,2 and the trees from this foundation are still present in the basement.1

After the death of Josiah James Howlett, his second wife inherited the home. Isabella had been investing money in the stock market that crashed in 1929 and lost all of her savings, making her unable to keep up with payments. William Howlett, one of J.J's sons, then purchased the home. Isabella continued to live in the home with other members of the family.1

Albert George Howlett’s sons lived with their mother and grandmother in the Howlett House.1

1939 – Ray Electric Installed Electricity and Plumbing in the Home1

Part of the shop on the property was used as a photo shack where George Howlett and his brother would develop photos. Water for developing the photos had to be carried over from the school well.1

19?? - The Howlett House was Purchased by Mrs. Trotter, a Dressmaker and Milliner6

The family consisted of Elizabeth and Galt Baird and their son, Andy.6

1975 - The Sandilands Purchased the Home

Josiah James Howlett, of Irish descent, was born in 1857 and died in 1931. J.J was known in the town of Glen Morris as a builder, constructing many homes in the area including: Nelson and Gladys McCrea's, Morley Miller's house, and Gordon Sickle's home. J.J helped to build the verandah on the church manse in 1924, and also helped build the Kelman House. Josiah bought the old township hall, and renovated the building along with the library and centennial hall. He served as president at the Glen Morris Library in 1890. Howlett also owned the stone mill that had a pond and water wheel that ran his woodworking machinery for all of his projects. Aside from building, Josiah chopped grain for farmers and was instrumental in getting the Glen Morris Church's first organ. At the church, Josiah was a Precentor for many years and known as a good singer.

At one time earlier in his life, J.J lived at what would later be the LE&N train station. J.J married Margaretta Weir, and then was married to Isabella Wallace after Margaretta's death. He had two sons named William and Albert.6 It is thought that he may have had one brother.1 He built the Howlett House in Glen Morris around 1915.

The Howlett House has a rectangular plan with a small right wing, and what used to be a woodshed off of this wing. The home has horizontal aluminum siding with original cut stone, broken coursed foundation. The front façade features a medium offset cross gable and center door, and an open verandah with a square column supporting one corner. At the back door there is a small closed porch that used to be an open verandah with a railing. Corner brackets are present on the main unit’s trim. The windows are flat structured, and the main window has a sash with a mullion. All windows are double hung. The home is two storeys and has a single center chimney. 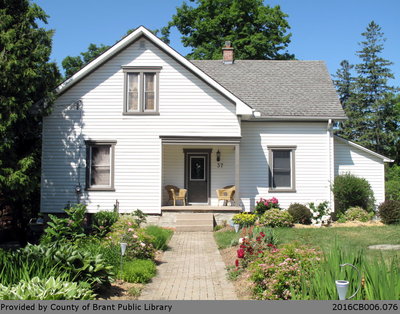