The Charles Douglas Smith House of the Burford Township was built circa 1860 by Charles Douglas Smith. It is presumed that Charles’ father Russel severed land for him that was originally part of Russel Smith’s vineyard. While not much is known of the history after this time, the Charles Douglas Smith house was purchased by the Smith family (no relation to Charles) in 1933 and has remained in the family’s ownership ever since. The property has a ginseng farm and features a yellow brick house with an addition that was built in 1998.1

Charles Douglas Smith’s father Russel Smith gave Charles the land in around 1860 but possibly later than this exact year due to Charles' birth year being 1844. A yellow-brick home was then built on the property.1

Although the ownership of the home after Charles is unknown, it is known that Charles left the Fairfield Plains area sometime before his death in 1918.2

Doug and Carol Smith are Charles and Evelyn Smith's son and daughter-in-law.

The Charles Douglas Smith house is a one and a half storey yellow buff brick Gothic Revival home with an asymmetrical façade. The home features a high gable roof and side right cross gable. The layout of the front unit is an L-shape, common of Ontario farmhouses of the time. There is also an attached back unit to the home. The main door is centered with a semi-circular opening shape, and has a sashed semi-circular transom and sashed, flush light side panels. The homes most notable features on the façade are the bay dormer tower and dormer gable window on the opposite side. Above the round double hung windows with transoms are arch radiating voussoirs. The brickwork is stretcher bond and the sides of the home have brick quoins for decoration. The home has projecting verges and deep overhanging eaves. 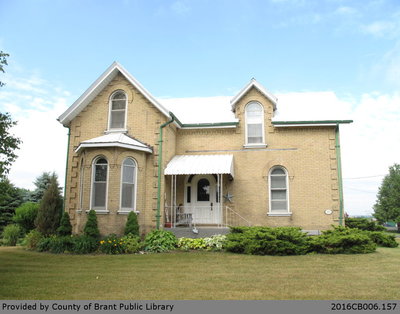