The McLean Farm is a century farm located in Newport. Purchased in 1849 by Edward and Mary McLean and passed onto relatives throughout many generations until it was purchased by Harold and Jan Davis with Harold being the nephew of Vallera McLean (née Davis). The property originally featured only a log cabin. The yellow brick house was built in 1859, and additions were built to the back of the home circa 1900. The property now features the McLean House and two barns, one of which is an original structure. A store used to sit on the northeast side of the property.1

Originally, there was only a log cabin on the property. Edward and Mary raised their 16 children at the McLean house.1

1859 – The Front Unit of the Home was Constructed1

1910 – Martha Greenwood Married Arthur Birdsell After the Passing of Edward2

1925 – The Silo was Built by Martha and Arthur Birdsell2

Harvey was Edward and Martha’s son. The couple purchased the home when they were married and ran a farm on the property that had beef cattle, dairy cows, chicken and hogs.3

1949 – A Bathroom and Pressure System Were Installed2

1955 – Horse Stables Were Converted Into sow Pens.3 The Verandah and Sidewalks Were Added2

c. 1988 – Harold and Janice Davis Purchased the Home From Harvey and Vallera1

Harvey and Vallera McLean were married August 23, 1939 and were the third generation of the McLean family to live on the McLean farm. Their children went to Newport Community Center, except for Ed who went to Farrington School. The couple were members of the Newport Euchre Club and helped with dances and catering. Vallera was an active member of the Newport Women’s Institute, and both Harvey and Vallera belonged to Burtch Baptist Church. Vallera was a piano teacher and organist for the church for many years.2

The farmhouse is a single-detached, two storey home, made of Scottish bond yellow brickwork. The front unit of the brick home was constructed in 1859, and the back additions were built circa 1900.1The home is triple brick and has a 30 inch wide foundation.1 The trim present around the home is boxed-plain cornice with return. There are two main windows on the first floor of the main façade that are flat, double hung, and 6/6. The main window on the second floor is multi-paned with a sash and flush light fan transom. The façade is symmetrical with a center door and center gable. The verandah on the main façade has a hipped roof and engaged square columns. A flush light mullion transom and flush light side panels surround the main door.

The original barn on the property (pictured) features a high-pitched gable roof and has vertical wood paneling. The rings that were used to tie horses are still attached to the concrete blocks at the foundation of the barn.1 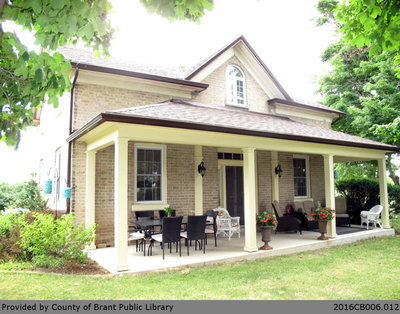