Mr. James Murray operated the first book exchange in the back of Murray’s store. There were 134 books and the library was open every Saturday from 9 am to 8 pm.6

1902 – A Grant for a Larger Library was Donated

The library received a grant of $10,000 from Andrew Carnegie on the condition that the town council would provide the library with $1,000 each year in order for services to remain free. The library by-law was voted on and approved by 224 voters, and rejected by only 11 voters.2

1903 – The Paris Public Library was Built

The Paris Public Library was expanded to 12 William Street (because of its central location) by architect A. Frank Wickson.2

The library consisted of a stacks area, reading room, and lending room. Mr. Ed Reynett was the first librarian.7

1906 – After Receiving Funds, the Basement of the Library was Finished and Electricity was Installed7

Books were kept behind a cage and could only be given out by Mr. Kirkpatrick. It was rumored that he would only lend out books if he approved of the person and their book choice.6

Self-proclaimed book censors appeared at the library and crossed out “obscenities” from “immoral” books. Librarian Alex Kirkpatrick received permission from the Library Board to kick out the book censors.4

1940 – Mr. Kirkpatrick was no Longer the Chief Librarian at the Paris Library6

The basement previously had a dirt floor, stone walls, and an open-beamed ceiling. After renovations the basement held the museum as well as a film library and large meeting room where plays, movies, and puppet shows were presented.6

1999 – The County of Brant Public Library was Formed

The Paris Library and libraries in surrounding areas merged to form the County of Brant. Paris becomes the central branch.1

Because of the buildings symmetrical layout, front façade columned porch, and dentilled cornices, the Paris Branch of the County of Brant Public Library is of the Greek Revival style, common of Carnegie Libraries of its time. The library features a centre gable with the words “Public Library” displayed underneath the trim, another common feature of Carnegie Libraries. The building is two and a half storeys with a cottage roof and stone foundation.7 The library originally had a circular skylight that was removed in the ‘70s. The second floor is now above where the skylight used to be.5

Brichromatic brickwork is present as a means of creating a patterned design. A reproduction of the detailed design can be seen on the 1995 addition. As well, the original back wall of the building is visible on the inside of the new entrance way, preserving the architectural integrity of the original structure. 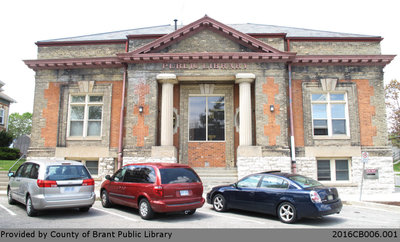