Smith John Wait House was built in 1871 after John Wait bought the property from his brother George. Smith John Wait, an avid horseman, built the red brick home and a large barn on the property with an area for horses that was later removed. Over the years, the size of the land has changed considerably as acres have been sold, bought, and exchanged. In 1909, land on the southern portion of the property was given to the local school in exchange for land east of the property. In 1928, Arthur Bennett purchased the lot and started a successful business called “Maple Grove Orchards” after planting orchards of fruit. During the time of Edward Moyer’s ownership, the orchard as well as the barns were renovated and changed. Edward Moyer expanded the property after purchasing one acre of land on the North West side. This acre was sold during Clifford Jones’ ownership to Jones’ sister.1

In February of 1871, Smith John Wait and his wife Sophronia Doud Wait bought 10 acres from Lot 4, concession 4 of South Dumfries from his brother George Smith Wait for $700. On the North East corner of the lot, Smith John Wait built a large red brick house with four bedrooms upstairs and 4 rooms downstairs for dining and kitchen purposes. In June, Mr. Smith Wait purchased 11 acres to the west of this property from Mary and Abram Betzner for $1850.

Mr. Smith Wait sold 1 acre of the North West side of the lot to Edward Ellis, on which Ellis built a small home.1

???? - Upon the Death of Smith John Wait, his Housekeeper, Mrs. Cynthia Thompson, Inherited the Home

In October, Mrs. Cynthia Thompson sold the home to Mr. William Robb of the Beverly Township for $3500.

1914 - Herbert Levi Howell Purchased the Property from Mr. Robb for an Undisclosed Amount

Arthur Bennett, a retired railroad telegraph operator, purchased the property to a make a home for his brother and sister – Horace and Emily. Bennett started a successful business named “Maple Grove Orchards” after planting an orchard of peaches, pears, cherries, and apples.1

The small house built on one acre of the North West corner built by Edward Ellis in the 1870s was destroyed by a fire.

Ill health forced Mr. Bennett to sell the property to Edward Moyer. Mr. Bennett died a few days after the sale of the home. Under Mr. Moyer’s ownership, he removed deteriorating trees in the orchard and planted more apple trees west of the school, as well as 75 peach trees east of the home. Edward Moyer also renovated the barns, making a cold storage for fruit and removing the stalls in the lower level of the main barn. Mr. Moyer used this space for storing his tractor in the winter. Due to marshy conditions, Mr. Moyer dug two ponds. One pond was south west of the barn and the other was located south of the school.1

1958 - The Property is Expanded One Acre North West

To square off the property, Mr. Moyer bought the one acre North West corner lot from W. D. Taylor.

Smith John Wait ran for the 1863 South Dumfries Township Councilor position, but lost to Purvis Douglas Lawrason. He was married to Sophronia Doud and was brother to George Smith Wait.2

This building is an attached irregular, two storey, red brick home with a high gable roof. It is of the High Victorian and Italianate style architecture, featuring two bay windows on the façade and west side, square columns, and cornice brackets along the eaves. Many of the windows around the home have a semi-circular opening structure and are double hung. There is also semi-circular brick trim above these windows. The brick is three layers thick and of Flemish bond, while the stone foundation is 2 feet thick.1 Decorative quoins are featured on the outside walls.

Originally, the home had verandahs on the front west half and across the back east half.1 While the verandah on the west side is still present, the east verandah has been replaced by a vertically paneled, closed addition that now serves as a sunroom. The home also has a woodshed.

On the west side of the home is the original 30’ by 40’ hip-roofed barn, the main barn on the property since its construction. During Mr. Moyer’s ownership in 1957, the west half of the large barn was made into cold storage for fruit. Moyer removed the lower level stalls and added double doors for the winter storage of his sprayer and tractor. Wells were located just west of the house and below the barn.1 When renovating, Mr. Moyer gave the harness house a foundation after it was moved to the south end of the house. The harness house then became the garage. The 20' by 30' carriage house was moved and used for storage by Mr. Moyer, however, this structure has since been removed from the property.1

On the interior, the house has oak handrails, stairs, and spindles and floors that are tongue and grove pine. Part of the cellar was a cistern for rainwater.1 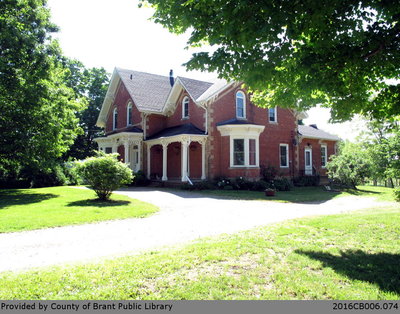