A log barn and possibly log house were believed to have been built on the property by Samuel after he purchased it.

1862 – The Christopher Latshaw House was Built

The home was built by Christopher Latshaw. The masonry (or stonework) was done by Alexander Kelman, a prominent mason in the Glen Morris area.1

1877 – Jane and William Head Purchased the Christopher Latshaw Home From Christopher for $15,0003

1889 – Robert Rose Purchased the House from the Head Family1

1895 - Robert Rose Built the Barn on the Property3

Mr. Murray purchased the home from Mr. Rose and resided in the Christopher Latshaw house until his death, upon which the home was inherited by his son Robert Murray Jr.1

William Morton and his wife Frances moved into the home. After Mr. Morton’s retirement a year later, the couple moved into a home across the street.1

Cecil Smith and his wife resided in the home for only a year as Mr. Smith’s wife was disapproving of the house.1

During Donald Shaw’s residency in the Christopher Latshaw House, the front verandah and white picket fence were torn down and granite steps and a decorative light overhanging the door were added. A flagstone patio was built at the north end of the door. The Shaw’s had 3 children by the names of Hedley, Jacelyn, and Roselyn.

The couple from Mississauga named the house “Tighnabruaich” meaning “House on the Hill,” although Isabelle wanted to name it after the mulberry bushes that were present around the home. Ronald and Isabelle rebuilt the old fireplace and installed an oil furnace in the house.1

The Christopher Latshaw house underwent renovations on the interior and exterior of the home. The two attached units at the back of the home were altered, and the landscaping and in ground pool were updated.

Christopher Latshaw was born sometime around the year 1814 in Pennsylvania. Christopher was the son of Joseph Latshaw and Mary Riddle Latshaw, his father being recognized as one of Brant’s first settlers. He was a brother to 12 siblings: Maria, Isabella, Adaline, Harriet, Samuel, Henry, Eliza, Matilda, Peter Joseph, Lucinda, John, and Catharine. Christopher’s brother Samuel founded Glen Morris in 1848 and donated the land for the first Presbyterian Church. Samuel was a supporter of social reform, the temperance movement, and William Lyon McKenzie. He was involved in the 1837 rebellion.1

Christopher grew up in the “Paris Plains” at the Latshaw Homestead. Christopher’s sister Christine Latshaw Spottiswood lived in what is known as the Spottiswood House in South Dumfries. He was a farmer of many things including of bushels of wheat, barley, apples, peas, oats, potatoes, hay, and carrots. Christopher was appointed to the poundskeeper and fenceviewers committee and served as the treasurer of South Dumfires from 1870 to 1876.1

Originally residing on the “Paris Plains” on Concession 4 in 1851, Christopher bought 244 Acres in Glen Morris from his brother Samuel in 1854, which is the land on which the Christopher Latshaw house currently stands. Christopher left Glen Morris in 1878 and moved to Amherstburg Ontario. He died on June 14, 1882 in Malden Township, Essex County, Ontario due to old age and chronic nephritis. The year before Christopher died he listed his religion as “Free Thinker” in the 1881 census.1

Robert Rose was born on April 3, 1835 and was the son of John Rose.2 He purchased Christopher Latshaw’s house in 1889. Mr. Rose was described as a two hundred pound man with his right eye missing due to a mishap that happened while tying cattle. He owned many lots of land, one of which he had built a home on (lot 23 concession 5 in South Dumfries). Mr. Rose acquired the property now known as the Glen Morris Public Library, which he donated to the library. Down the road from this land, Rose also owned what is known as the Howlett house on Princess Street and built a barn on the property.1

The Quicks moved from Mississauga to the Latshaw house in 1965. Ronald Quick was the president of Chicago Rawhide of Brantford and Isabelle Quick was a local artist. The couple had three children: Steven, Richard, and daughter Jamie.1

The Christopher Latshaw House is a two storey home of the Field Stone architectural style. The material used for the buildings walls is rubble with a natural finish. The trim at the top and bottom of the windows is made from cut stone, and keystones made from cut stone are present on the window’s shaped lintels. The exterior walls also feature quoins. The floor plan of the main unit is rectangular, however, there are two additional units attached to the main building making the layout irregular in shape. The property also features a circular driveway at the front of the house.1

The façade of the home is symmetrical, presenting a centre gable, centre door, and large windows, all with flat structural opening shapes. Similar to the windows, the door features a shaped lintel made from cut stone. The door also has flush light side panels and a transom panel of the same style. The centre window on the second storey is wider than the other windows and sashed with sidelights. Above this larger centre window is a half round window also featuring cut stone trim with a keystone. Corniced boxed decoration is present on both the eaves and raking trim.1

The original façade had a verandah stretching 6 or 7 feet across at both ends and a white picket fence that ran across the perimeter of the home was also originally present. However, both of these features were torn down during renovations in the 1950’s. At some time there was a balcony below the big centre window where apparently one could see carriages coming up the driveway. The two back units of the home originally featured the same stonework as the main unit. Renovations that took place in 1995 replaced most of the stonework in the rear units with vertical wood paneling.1

Although the interior of the home is not pictured, there are many historical features of note inside. Features of interest include 11 foot ceilings, a wide staircase, and two inch pine floors. The original fireplace was from Belgium and assembled like a jigsaw puzzle, and was rebuilt during the Quick family’s ownership of the house. Finally, the entire north side of the bottom floor used to serve as a ballroom.1 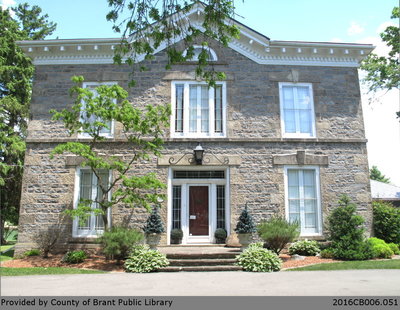