Located in South Dumfries Township, the Griffin house was built in approximately 1898 for Maggie and William Fleming after the couple purchased the .45 acres of land. This Colonial Revival style, white frame home has undergone many renovations over the years, originally featuring a picket fence and pillars that supported an open verandah. Despite these exterior changes, the home has always maintained its Colonial aesthetic. The Griffin house has been owned by the Griffin family in 1961 and was rented out as separate apartments the following year.1

1898 - The Griffin House was Constructed1

Maggie and William Fleming purchased the lot from Charles Stewart for $275. The home on the property was built shortly after. The Fleming's lived at the home until Gavin Fleming built another house down the street.2

19?? - The Griffin House was Held "In-Estate" for Many Years After Charles and Nellie Sharp Left2

???? - The Picket Fence was Removed and Renovations Occurred1

During Dovolai's residency, he remodeled the interior of the home, renovating the bedrooms and creating two and three piece bathrooms. Dovolai also dug a well on the property that was 167 feet deep.

There were no longer pillars on the verandah.1 The shed was turned into a garage and relocated on the east side of the property. The Griffin's also did landscaping.2

Also beginning that year, two of the rooms were rented out and the house was divided.1

The Griffin House is a single detached Colonial Revival style home with a symmetrical layout, rectangular plan, centre door, and centre gable. The home in the 1930s featured multi-paned windows, a common feature of colonial style homes. The windows currently have a flat opening shape, plain trim, a sash division, and are double hung. There are two centre side left and side right chimneys that follow the symmetrical plan. The exterior walls used to have vertical planks of wood siding. Since renovations in the '30s, horizontal clapboard has replaced this. The original door featured a transom panel and additional gable with a closed entrance protruding from the main façade.

The Griffin house originally had four small bedrooms upstairs and four rooms on the main floor. There was only small washroom on the north side of the home that received limited water supply until around 1957 when Kalman Dovolai purchased the home and added another washroom. At some time before the 1930s, there was a picket fence across the front of the home that has since been removed. The home also used to have a large verandah on the front façade with plain round columns. The front entrance led to a staircase. 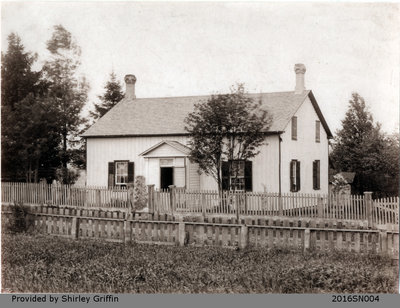