Creators
Franklin Smoke, Author
Thomas McCosh
, Recipient
Media Type
Text
Image
Item Type
Documents
Description
This item is the first page of a letter addressed to Thomas McCosh, the Town Clerk for Paris, from Franklin Smoke on behalf of Paul Wickson, a former resident of Hamilton Place. In the letter Mr. Wickson takes exception to the possibility of a sidewalk being laid any further south than the north gate on his property. The letter is dated May 18th, 1906. A transcription of the letter can be found at the bottom of this record.
Date of Publication
1906
Subject(s)
Correspondence
Documents
Collection
Historic Buildings of the County of Brant
Language of Item
English
Geographic Coverage
Copyright Statement
Copyright status unknown. Responsibility for determining the copyright status and any use rests exclusively with the user.
Recommended Citation
Letter from Franklin Smoke to Thomas McCosh, 1906. Paris Museum and Historical Society. Item No. 2015PM026.
Terms of Use
The information and images provided are for personal research only and are not to be used for commercial purposes. Use of this information should include the credit “Paris Museum and Historical Society.”
Contact
Paris Museum and Historical Society
Email
WWW address
http://www.theparismuseum.com
Agency street/mail address

a petition was presented at the last meeting of Council to

lay a sidewalk from Mr R.L. Murray's to the Review Office

by-law No 407. The petition on which the Council acted was

tion was in circulation. There was, however, a petition in

circulation and Mr Wickson signed it calling for a sidewalk

below that point should the Council lay one. It seems an

unwarranted waste of the Town's money to lay a sidewalk all

the way down town on the east side of the Street. A suitable

crossing could be constructed at the Presbyterian Church, and

the way, and if this is objected to by the Council Mr Wickson

would be quite willing that there should not be any sidewalk

gate. I understand that the portion of the sidewalk already

Railway, and that therefore Mrs Walton's name being on the pet- 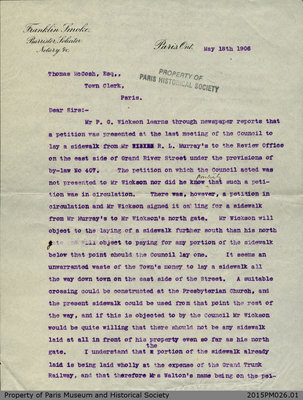