The Wolverton House is a Greek Revival style house located in Paris. It was built in the early 1850s and is located in what was the earliest residential area in Paris. The house was part of the underground railroad, serving as a destination for former slaves.

It took three years to complete the house.2

The property is left to his wife Juliet who eventually remarries.3

It is believed that the Sifton family rented the house during this time from Mrs. Smith.2

John and Eliza were a married couple from Norton, England, whose family would own the house for 80 years. They had five children and John established a fruit orchard in the ravine. He would sell fruit to boaters traveling down the Grand River.2

Eliza Baker passed away on January 17 "from senility" at 81 years of age, leaving her husband a widower.2

William Waite Patterson was the son-in-law of John Baker, he was a dentist and mayor of Paris. Dr. Eric B. Patterson and his wife Eleanor H. Patterson acquire the house afterward.2

The house was willed to Eric's sister, Elaine, on September 11.2

The house was willed to Iona Purchase, by her mother May Taylor. 2

The Scarfs, hailing from the US, had a paint store in Brantford. They only owned the house for 6 months before moving back to the United States. 2

On September 19, the ownership of the estate passes to Arthur Potts, who goes on to turn the home into three apartments: the carriage house, the upstairs, and the main floor and basement were sealed from one another and turned into separate apartments.2

The Convey family lived in the main floor and basement for 25 years and rented out the other two apartments.2

The house of bought by Judy Acri and her husband, Rick Courtemanche in August. At this point the house was in rather poor shape and the two have spent considerable effort restoring it.1

Asa Wolverton emigrated to Paris in the 1830s from Cayuga, New York, with his wife and family. He built a sawmill soon after his arrival. This enabled him to design and build his house, the two neighbouring houses to the south and quite probably the frame houses across the street. All three of the river properties have double or triple verandas overlooking the river. These houses were the nucleus of Paris's first residential area. The smooth, light effect of the Wolverton house is created by a white stuccoed surface. The design is a graceful and less cumbersome architecture of the neoclassic style which was out of favour by this date and the new demands for dignity and solidity in Greek form. Like many Greek Revival houses it is merely a traditional five bay gable end house with a Greek Doric double porch added as an entrance.1 There are five original fireplaces in the house. Below the stairs is a recently opened cooking fireplace. The kitchen here was connected to the dining room above by a dumbwaiter. This explains the shape of the shelf opening beside the mantelpiece in the large dining room to the right. Double arcades on either side of the fireplace also hark back to the neo-classic. The parlor was to the left. Doors and windows in the rooms on either side of the hall have Greek Revival flat trim with molded center (three different forms) and the boxed corner necessary to avoid a mitered corner with this type of trim. A dining room window has the name of Sofia Sifton scratched on its glass. The house was one rented by Sir Clifford Sifton's family. The hall exhibits more neo-classic detail in a cornice staircase and divided archway.1

The out buildings are connected to a parallel plan to the main section of the house. This sort of addition, possibly to form an L or to the rear, is common in New England and the Maritimes but is rare in Ontario. Immediately adjacent is the carriage house. Next is a lumber room which had two double entranceways under a triple paneled framework. The two storey barn with stables for animals underneath terminates the group.1

A cobblestone garden was extended along the front of the property and included the Wells house to the south. Only the front wall had stones of a small and uniform size. The rest of the wall is made of larger stones with wide variation in size. The top was finished with wood planing pitched at 45 degrees to meet in the centre.1

The Wolverton House was part of the underground railroad, being a safe destination for slaves living in freedom. Asa and his wife Juliet took in these people as well as had servants originating from Ireland. The Wolvertons were childless and this could be one of the reasons this home was built with just one bedroom. There was a large walk-in closet off the master suite and a bathing room adjacent to the closet. On the second floor is a ballroom with fireplace. In 2007, the Courtemanche family purchased this home and are spending endless hours to restore this manor back to its original splendor. It is estimated that it will take up to ten years to finish the project which will include not only the interior of this home, but the exterior architecture, walls, fences and gardens. It is interesting to note that the lower level of the barn is still in the original 1851 state with the animal stalls and water trough.1 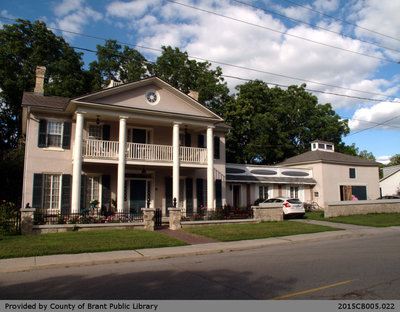