Located in Burford Township, John Fowler purchased the parcel of Crown land this farm is located on in 1803 and the plot stayed in his family until it was purchased in 1861 by William Bonney. The farm was purchased from a trust by Bruce Innes in 1940 after the farm fell into tax arrears.

It is not known whether John Fowler purchased the land or was granted it. 1

Land Registry documents indicate that over the next few years, a further 150 acres of land west of the "home farm" was purchased by William Bonney.1

William left the farm to his two sons: the home farm went to Wellington Albert Bonney, and the 150 acres to the west went to William Henry Bonney.1

Upon his passing, Wellington willed the "home farm" to his two sons: John Albert Bonney and William Gordon Bonney. John Albert would be responsible for the business and accounting end of the partnership, while William Gordon was to look after the day to day farming operation.1

In June, William Gordon signed over his share of the farm to John Albert for $1.00.1

The farm was taken over by a trust company and the farm and/or house was rented out during that time.1

In February Bruce D. Innes bought the farm from the Commissioner of Agricultural Loans and operated it until his death.1

Bruce's son, Robert B. Innes, and his wife Nancy, have continued operating the farm to the present day. 1

The farm house is a two storey single-detached building with two single-stack chimneys located side-left and rear-centre. The dormer shape is a centre-gable with return and roof trim is boxed-plain cornice. The brick design above the windows and doors is a unique arch radiating voussoirs and the surrounding sides are plain. The porch originally on the home has been removed and siding has been added. An aerial photograph of the farm taken in 1948 can be found here and a photograph showing the porch can be found here. 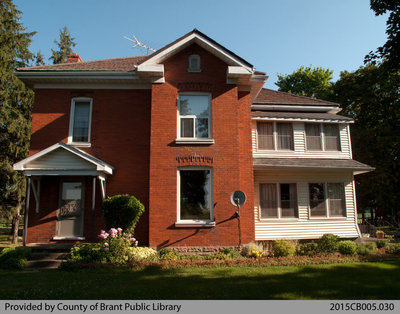