The Sowden House was the home and office of Dr. Sowden, an early doctor. The original home was built in the distinctive cobblestone style, though it has a recent addition in a more modern style. It is currently owned by Roger Moriarity. It acted as a combination living space and business. Sowden was a druggist; the rounded corner led to his dispensary where he sold medication5. The original shutter door design has been restored, and the original inner doors are still present.

1870 – Sowden Moves to Scotland Due to Failing Health

1872 – Hall Family Moves Back to Scotland

Thomas Hall closed his store in 1872 and the family followed Sowden's lead back to Scotland in 1872. Note #

Sowden certainly diversified his business; an 1851 business directory lists him as a chemist, druggist, stationer and bookseller. He stayed in Paris for most of the rest of his life, but returned to Scotland in 1870 due to failing health.Note #

The second owner of the house was Thomas Hall (January 31, 1835-July 14, 1913), also from Scotland. He was born in Clackmanan, and immigrated to Canada in 1855. He first moved to Montreal, before moving to Paris a year later. Most of his early activities are unknown, but a directory from that period lists a Thomas Hall who was employed by Robert More, a dealer in dry goods, groceries, wines and liquor, hardware, glass and crockery.
Hall opened his own dry goods business in 1862, the same year he married his wife Mary Ann Gibson (March 31, 1836-July, 1919) in Alloa, Scotland. They moved in with Sowden in 1865. In 1870, when Sowden returned to Scotland, he sold the house to the Halls for a sum of $243.50, to be paid in two half yearly payments of $121.75. This was to continue for the remainder of Sowden's life, which would not be much longer--while the exact date of his death is not known, family legend has it that he died in Denny, Scotland in December, 1872.
Thomas Hall closed his store in 1872 and the family followed Sowden's lead back to Scotland in 1872. However, they did not stay there long; they returned sometime later, at an unknown date, and around 1880 he became a collector of customs in Canada. He would hold this position for twenty-five years.
The family had six children: Mary Milliner Hall (b. 1863); William Hall (b. 1865); John M. Hall (b. 1867); Jean Watson Hall (b. 1869); Margaret Bradley Hall (b. 1871); Thomas Gibson Hall (b. 1874). In 1891, at the age of 23, John M. Hall opened the dry goods store which is still operating under his name in downtown Paris.
The last of the immediate family, Jean Watson Hall, died in 1964. The house fell to two nieces from California and Arizona, who never lived there. The house would be sold later to James Dinsmore of Brantford, who converted the house into apartments and rented it for several years. In 1968, Dinsmore sold the house to John Muir; he later sold it to the present owner, Roger Moriarity. Over the last five years, he has converted the house back to its original floor plan.Note #

The Sowden House was built around 18451 for Dr. Samuel Sowden, one of Paris's first druggists. It was one of the later cobblestone houses built by Levi Boughton, and its design is a testimony to his skill. Its most striking feature is the unique curved corner, lined by evenly rounded cobblestones all along the rounded edge2 — a refined feature rare even in New York, where cobblestone architecture is more common3. The back of the house, which is not visible from the street, is finished in fieldstone4. 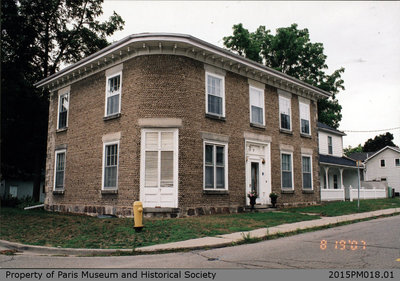