The Van Sickle house is located in Onondaga Township. Construction of the house began in 1894 for Charles Edwards and his family. The house was rented by Tom and Dorothy Van Sickle in 1948 and purchased three years later for $7,000.

George, the eldest son of Charles Edwards, enlisted on 8 March 1916 at the age of twenty. He joined as a gunner in the 56th O. S. Battery 14 Howitzer Brigade in the Canadian Expeditionary Force, Canadian Field Artillery. At the time, he was attending the Ontario Agricultural College in Guelph, Ontario. He served overseas in both England and France. In August 1918, he received a gun shot wound in the lower lumbar, and was admitted to the Northamptonshire War Hospital in Duston, England. After two months of recovery, he was taken back on strength, and was discharged on 17 January 1919 due to general demobilization. 2

After Charles Edwards died, in the very house he built. 1

They had three children: George, Barbara, and Bill.1

They had five children: Jean, Kathy, John, Charles, and Donny. 1

She was hired to look after Mrs. Edwards who had cancer.1

They paid $7,000 for the property. They go on to have seven children: Howard, Marvin, Ellen, Audrey, Mary Ann, Doug and Joan.

When first built, it was a modern house with a windmill that pumped water from the nearby Fairchilds creek to a cistern in the basement. The water would then be manually pumped into a tank in the attic and from there it provided running water to the bathroom. The bathroom retains the original claw tub and pedestal sink. The house still has the original slate roof.1 The exterior walls consist of triple bricks made in the United States. Insulation is minimal so the house gets rather cold in the winter. 1 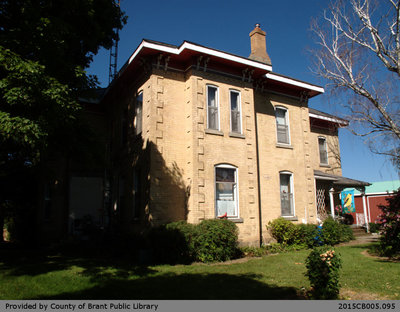