The Wills house is located in Onondaga Township. Adam Butter, a Scottish immigrant, constructed the home in 1849 with the help of his brothers, and finished construction in 1855. Arches are found on either side of the driveway with the names Frank and Adam Butter inscribed, which were built by the original Adam Butter's son, who was also named Adam.2 Mrs. Frank Butter was a member of the Middleport Women's Institute for many years and held a meeting for the group at her home.1 The Butter's owned the home for about 100 years. A log cabin and brick kiln were located on this property at some time.2 The monitor-style barn located on the property is thought to be the only one left in the County.

1849 – Adam Butter Acquired the Property From the Crown2

Adam and his brothers from Perthshire, Scotland purchased property in the Onondaga area. Adam bought the Don Wills farm and his brothers purchased a property two miles away in what is now Ancaster. The siblings worked on both properties together which involved clearing the land, building barns and a log cabin on each property, and finally, constructing the main houses. These homes were almost identical to each other. A brick kiln was constructed on the property and its ashes can still be seen in the north area of the field.

Adam Butter, born in 1813, is one of five brothers who immigrated to Canada from Perthshire, Scotland in 1842. In 1849, Adam purchased land in Onondaga off of the Crown upon which he built his house called “Spruce Hill,” now known as Don Wills Farm. After the brothers came to Canada and before they settled in the Onondaga area, the siblings were settled in Toronto where Adam was a carpenter.2

Of the five brothers, Adam was the only to marry. He was married to a woman named Jean and had eight children. Jean’s sister Ellen, also an immigrant from Scotland, lived in the log cabin on the property for many years. Adam was the secretary of the School Trustees in the year 1860, and placed an ad in the Toronto Globe for a teacher at Onondaga School No. 3.2

Adam and Jean’s son Adam travelled to the United States where he found inspiration for the gateposts that he later recreated at Don Wills Farm. His name and that of and his son Frank were engraved into the arches.2 Adam died in 1891 and Jean in 1901, both in Carluke, Ontario.

This is two storey red brick house with a hipped roof. It has a frontispiece topped by a centre gable with a broken pediment. Buff brick details include the quoins on the corners and frontispiece, the lintels above the windows and the bands on the pair of twin chimneys (four chimneys in total). The door is surrounded by sidelights and transom and the windows are 6/6 with an arched window in the centre.

During the construction of the home, another home was built for Adam's brothers with an almost identical plan. Both homes had double brick walls, plastered interiors, pine plank floors, twelve inch baseboards, and three foot wainscotting made of local pine. A portable sawmill was used to make the logs on the farm into lumber to be used for building the home.2 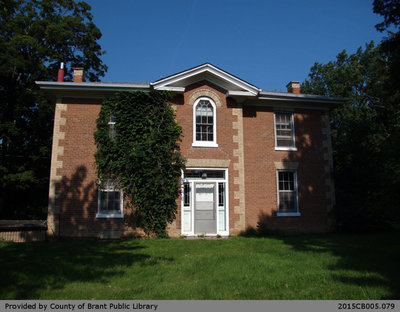