Located on the Phelps tract, a 1200 acre parcel of land granted by Joseph Brant to Epaphras Lord Phelps in 1804, the Phelps-Guest house was originally built in the 1840s. The original stone home has received two significant additions: a board and batten addition at the rear of the building and an Italinate addition added to the front.

The Phelps Tract was granted by Epaphras Lord Phelps by Joseph Brant.

Stone house is built be descendants of Epaphras Lord Phelps.

While not an inhabitant of this home, Epaphras Lord Phelps is important due to the fact that he was granted the land where the house is located by Joseph Brant in 1804. Originally a school teacher from the United States, Phelps taught at schools in Long Point, Blenheim and in Brant's Mohawk village. From 1800 to 1812, he was Joseph Brant's white secretary but was forced to flee to the United States after advising Brant to stay neutral during the War of 1812.

The new front part of the house was built in 1876. The original house was board and batten while the older middle section was built with ballast and timbers. The ballast was brought back on ships going up the river and returning from hauling wheat. The veranda was added around the turn of the 20th century. The foundations of the home are rubble and pharge. 1 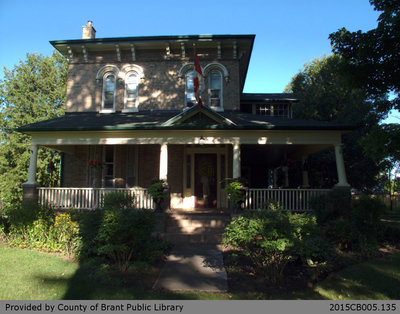