The Shepherd Farm is located 1 mile north & ½ mile west of the village of Scotland. The buildings are situated on lot 2, concession 13 of Burford Township. In total, the farm consists of 171 acres.
Over the years prior to 1914 there were several owners of this farm described as the North Half of Lot Number 2 in Concession 13 of Burford Township. It was originally set aside as a “Clergy Reserve”. Clergy Reserves were usually parcels of 200 acres and were established at various intervals through the township. Their main purpose was to provide maintenance and support for the clergy. In practice they greatly retarded the development of the area since adjoining property owners found it difficult to make progress with things such as road building. Gradually these reserves were dispensed to the highest bidder.
During the early years of ownership by Louisa and her husband, I. B. Merritt, the house and buildings for the farm were located in lot 3 (the very north west corner of the farm). It is not known precisely when the current house and barns were built at the new location but census records show they did not yet exist in 1860 but were in place by 1870. This makes it one of the oldest houses in Burford Township.

The first recorded sale of this property has it being sold by the crown to Joseph Moore in 1831 for twelve shillings six pence per acre.1

Louisa Kelley, daughter of Abraham and wife of Isaac B Merritt, inherited the farm from the family on May 31, 1852 on condition that she make a payment of one hundred dollars to each of her two sisters, Elmira and Mercy Jane, in six annual installments. Louisa Kelly and Isaac B. Merritt continued to own the farm until Louisa’s death in 1900.1

During the early years of ownership by Louisa and her husband (I. B. Merritt) the house and buildings for the farm were located in lot 3 (the very north west corner of the farm). The current house and barns did not yet exist in 1860 according to the census.1

The current house and barns were built at the new location and census records show they were in place by 1870.1

The executors of Louisa’s estate were Merritt Smith, William Foster and Edward A Miles. (Merritt Smith was the great grandfather of Murray Cameron Smith and Ed Miles the great grand uncle of John Colborne Shepherd.) These three gentlemen managed the farm from here on.1

In March of 1903, Merritt Smith, William Foster and Edward A. Miles sold the west 50 acres to George Campbell for $2600. Mr. Campbell already owned the N/W quarter of lot 3 and this increased the size of his farm for 100 acres. 1

The remainder of the farm that had been owned by Louisa Kelley/Merritt (110 acres) was sold to Fred Vivian in 1908. 1

In 1914 the farm was comprised of 110 acres when it was purchased by George William Shepherd, my grandfather, from Fred Vivian for eight thousand eight hundred dollars. Mr. Vivian had only farmed there for 6 years (since 1908) however his wife, who was originally from the United States, found winters too cold in Canada and persuaded her husband to sell. The deal between Fred Vivian and George Shepherd was recorded on January 08, 1914 and a provision was written into the agreement that stated “The seller to be at liberty to take up and carry away all the pear trees east of the dwelling house on said lands if the same is done within one year from the 1st day of April 1914”. This request was made in view of the fact that Mr. Vivian had just established an orchard with 1000 pear trees and Grandpa had no interest in fruit farming. Very few, if any, of the trees were ever removed. By 2001 only three of the original trees were left and by 2007 only the one located on the lawn west of the house remained. 1

The Shepherd Family moved into the house early in the winter of 1914 with the understanding that the Vivians could remain in part of the house until spring. This they did. Over the winter Mr. Vivian had a chance to reflect on the deed and by spring had had a change of heart. He offered George Shepherd one thousand dollars to break the deal and let him keep the farm. By this time plans had already been made for the coming season and Grandpa was not in any mood to start looking for another farm. As a result he refused Mr. Vivian’s offer and the farm remained in the Shepherd family until December 07, 2012. Fred Vivian did move his family back to the United States, however, on one of his return visits to Canada he contracted the Flu when an epidemic was sweeping the country and he died when he was only 39 years old. He was a younger brother of Payson Vivian who owned and operated Vivian’s Mill at Oakland. 1

In 1921, 50 acres to the west of the main farm were offered for sale. This land was owned by Robert Schunk, brother-in-law of George Shepherd. Grandpa & Grandma were interested in buying the land and adding it to the 100 acres they already owned. The asking price of Five Thousand Dollars, however, seemed high. In the end it was purchased by John Watson who, in order to finance his purchase, borrowed four thousand one hundred dollars from Grandpa. By 1931 the great depression had started and John Watson was having financial problems as were many others at the time. In order to meet his obligations he agreed to sell the 50 acres adjoining the Shepherd farm for the outstanding amount of the mortgage plus two hundred dollars. Total sales price was four thousand three hundred dollars. This purchase brought the total acreage to 160. When George Shepherd purchased this 50 acre parcel in 1931 the farm reverted to the size and description of that owned earlier by the Kelley & Merritt Families.1

In 1935 George Shepherd acquired the 120 acre farm on the north side of concession 13, now owned by the Smith family, from Tom Cowie. He did this in order to help his younger son, Clarence Wray Shepherd, get started in farming.1

It soon became evident that Wray Shepherd was not interested in farming and he moved off the farm and into the village of Scotland in 1942. George Shepherd continued to operate this second farm for 3 years with share growers Charles Campbell and Bob McIsaac.1

When George Shepherd died later in 1945 he left 135 acres to his son John Basil Shepherd and the western 25 acres of the home farm to his son Clarence Wray. About one year later Jon B Shepherd purchased the 25 acre parcel from his brother, thus restoring the farm to its original size.

John & Sandra Shepherd purchased the eleven acres to the east of the main farm from John Atkinson in 1981 for twenty seven thousand five hundred dollars.1

John and Sandra continued to operate the farm until it was sold to Michael Haley on December 07, 2012. Having obtained ownership, Michael Haley proceeded to separate the farm house and outbuildings along with 2 acres from the rest of the farm.1

Michael Haley subsequently sold the house and buildings sitting on said two acres to Lloyd Saunders in the summer of 2013. Michael Haley continues to operate the remaining 169 acres of land under a long term lease agreement with David Smith of Shanghai Farming. 1

The exterior of this house is constructed out of grout which is a mortar mix poured in place of a stone foundation. The stucco exterior was added later by George Shepherd when studs in the walls first showed signs of weather1. 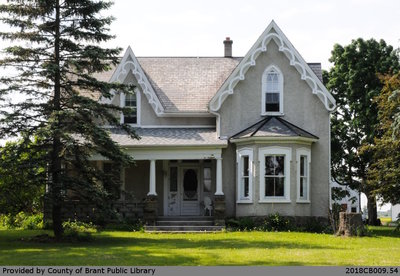