Originally located in the Cainsville area on what is now Colborne Street, the Thomas House was constructed in 1835 for John Thomas by William Abbot. Peanut butter was manufactured at the house by the Taylor family from 1920 until the middle of the Second World War when it became impossible to import peanuts. The house was moved from Cainsville to Newport in 1993 and underwent significant restoration to its original form. A granite rock with a plaque noting the home's history can be found at its original location.

On June 25, John Thomas commissioned William Abbot to construct a "...frame dwelling with good substantial timber, storm brick and finish other materials for the price of 400 pounds..." and on the condition that it would be finished before October 1st of that year.5 In exchange, Joseph Thomas would pay William Abbot 200 pounds upon the completion of the house, and grant him 100 acres of land.6

Albert Taylor was Hartnoll Cole's son-in-law. He put up a large building at the rear of the house where he manufactured peanut butter. He also installed modern heating and conveniences without altering the plan of the old colonial home.6

Importing peanuts from foreign countries became impossible due to the war, forcing the business to a standstill. Instead, the peanut butter manufacturing building was renovated into four apartments.6

The house was initially scheduled to be moved on April 2 however an unexpected ice storm delayed the move until the following Monday, on April 5. Unfortunately, the dirt roads the tractor trailers had to move across proved to be too muddy and a trailer sunk into the mud up to its axle. This required a tow truck and an excavator to remedy.3

John Thomas and John Smith came to the County of Brant from New York State at the suggestion of Cap. Joseph Brant. They built a two story frame house on a 200 acre lot. The two were accomplished builders and constructed the now famous His Majesty's Chapel of the Mohawks, the oldest Protestant church in Ontario. In 1791 John Thomas married Eleanor, the daughter of John Smith. During the war of 1812, the Smith-Thomas household was commandeered by government forces. During this occupation, the house sustained damage which led to a claim of 115 pounds being paid by the government. Upon a return from a trip to Tennessee, John Thomas brought with him two black servants, a husband and wife whom lived on the Thomas homestead and were cared for by Thomas in their later years.2

In 1993, Peter Stokes was in charge of examining the house and overseeing its restoration after its move to Newport. The roof was restored faithfully, using pine shingles with 5 inch exposure as it would have been done in 1835. Stokes believed the attic was used originally, but was unsure what its exact purpose was and it is now a reading room and gallery. The house had dormers that had been added at some point in its life and these were removed as they were not original. The servants room used to occupy the area that is now the staircase and was a 6 by 10 room where the servants lived. Peter Stokes was unsure where the stairs to the attic had been originally placed, so a decision was made to convert this room into the new staircase that leads up to the reading room. Another modification was the conversion of the kitchen pantry into a bathroom - this was cleverly done by moving the original door frame so that the bathroom is accessed from the hall, while the original gap was walled over.

When the house was moved to its new location, it was split in two along the main hall. The reason for this was that no nails had been used in the construction of the main hall, allowing it to be disassembled and reassembled easily. The 12" x 12" x 63' beams of the timber frame bear testament to the quality of the craftsmanship that went into the house. The flooring in most of the house is original - the only exception is the kitchen, where the original flooring would have long since been worn out. The majority of the brick is likewise original. When it came to the front porch, no official documentation or specifications remain to provide insights into what it may have looked like, however an educated guess was made based upon the prevailing styles of the time.

The house is deceptive in its size. Its double hung windows, large in size for bungalow, make it seem smaller when seen from the outside. The house oriented so that every window will get sun at some point in the day. This was practical to extend the useful day. There is beveled trim that leads to the four front windows. The raised panels encase the numerous panes of the windows, giving them an elegant look, enhanced by the fine mullions between the panes. 5

The Rumford fireplaces were originally intended to go on the outside walls, but when it was built they were moved to the inside to get more useful heat from the fireplaces - new thinking at the time that made the house much easier to heat. The brick the fireplaces are made of was more porous back in 1835 due to the lower firing temperatures available at the time. When the fireplaces were re-assembled on the home's new site, the bricks had to be soaked in buckets of water before being laid or they would draw moisture from the mortar and cause the mortar to crack and crumble.

The bake oven is located in the basement instead of kitchen - the chimneys are large and had to be dug deep. It seems that the masons took advantage of this to put the bake oven at their base. The oven itself is a beehive design - the platform was built first, then a dome of wet sand created on top, and three layers of brick were layered on top. Once the mortar had dried, the sand was scooped out, leaving an open baking cavity behind. The brick the oven is made from comes from the now demolished Grand Trunk railroad station in London. Other bricks came from the Newport schoolhouse (also demolished). Some of the bricks still bear the name that children had carved into the bricks. The sign for the Newport community center that hangs over the oven now was found at a flea market. The reason so much of the brickwork in the basement had to be replaced was that in the house's original configuration the oven was below grade. One descended through the outside storm cellar door to access it. This original basement was quite damp and many of the bricks had deteriorated beyond repair.

The current basement mimics the layout of the upstairs in a more modern way. Modern elliptical arches rise up around a central stove. The original windows did not survive well and had to be replaced with faithful copies. The windows themselves are large and provide plentiful illumination into the walk-out basement. The doors of the basement rooms were originally manufactured in 1810 in Nova Scotia. The Norfolk latches that lock them come from Pennsylvania. Finally, the wine cellar is a tiny interpretation of the Dundurn castle wine cellar.

The walls are one foot thick, and the double stud main frame is made of 12 by 12 beams. The main entrance is unusually placed on the west side of the building. The massive fireplaces were originally built up from the lower level, indicating the masons had to have done that part of the work before the framers began. The tongue-in-groove siding had planks that were installed up-side-down, opposite of traditional practice. 5 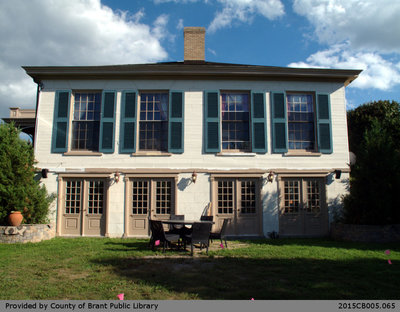