Constructed in 1888 by Dr. E.E. Kitchen, Sunnyside was built as a show piece with well-kept grounds. This building was the location for the inaugural meeting of the St. George Women’s Institute on January 13th, 1903 and the group continued to meet here until 1920. Beginning in 1957, Sunnyside operated as a nursing home and was then converted into a municipal hall in 1997. It was purchased by b David Bailey in the year 2000.

When the train wreck happened in St. George that year, Dr. Kitchen's house became an impromptu hospital and he billeted many of the injured at Sunnyside. 3

Mrs. Kitchen was the first local and district president.3

Dr. Donald never actually lived at Sunnyside, but his mother Reba, his brother Bruce, and his sister Jeane were there in the thirties. In the forties, during the war, Dr. Donald's wife, Peggy also resided here. 3

Mr. Serjeant purchased the house in the forties and lived there with his family. He took good care of the building and undertook several renovation projects. 3

1957 – Sunnyside Converted to a Retirement Home

1997 – Sunnyside Converted to a Municipal Hall

Dr. E. E. Kitchen was born in 1841, one of eleven children. His father was Edward Kitchen settled on the original homestead (Lot 3 Concession 13) in 1826, allegedly paying fifty pounds and a horse for the land. Edward Kitchen was a community leader and a progressive farmer, he served as a magistrate for thirty years and owner the first threshing machine in the area in 1835.3

Edward E. Kitchen followed in his father's footsteps when it came to community involvement: in addition to serving as a magistrate he was also a member of the Provincial Board of Health, president of the Brant Reform Association and the Farmer's Club, Master of the Masonic Lodge, and doctor for the Grand Trunk Railway. He was one of the founding fathers of the library and a chairman thereof for many years. Following the Bell Foundry fire of 1877, it was Dr. E. E. Kitchen who led a incentive in the community to support the rebuilding of that vital industry.3

In 1873, Edward E Kitchen married Annie Charleton at Rosehall, who shared Edward's passion for community involvement. She was involved heavily in organizing the Women's Institute and organized a branch of the Red Cross during WWI. 3

The rounded Roman arches which appear over the doors and windows, the sloping flat-topped roof, and massive north-east tower are common features of the Romanesque Revival style. The house is set back from the road by about 80 feet - an old trick to make a house more prominent than its neighbors. 4500 square feet are divided up among 27 rooms, including a ballroom on the third floor. 3 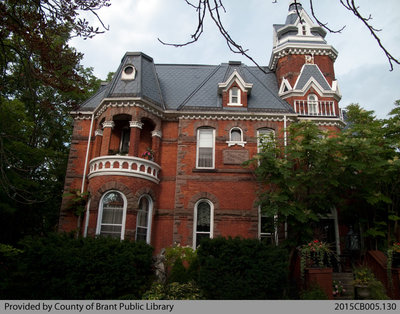