The name 'Vine Cottage' came from the stone cottage and wall covered with grape vines. The gardens were terraced to the south, and the north side of this cottage was covered with Virginia Creeper.

Jacob Steele hired a Scotsman from Paris to do the work, one Mr. Findlayson. The free stone from the house was taken from the north side of the road. Findlayson was apparently rather proud of this work on the house and would bring visitors from Paris, Hamilton and the surrounding area to view his handiwork. Meanwhile John Steele went to New York City to buy furniture for the parlor and a large square piano for his daughters. Mr. Steele ran several businesses from this farm. Two lime kilns are said to have been in operation at some point, through no record of them remains. A large cider mill also operated from the location, continuing even after his death. This mill used the power from the dammed Blue Lake Creek. During idle hours, Mr. Steele would use said power to run a wood turning lathe on which he made articles for his home.

Jacob Steele hired Mr. Findlayson of Paris to do the work. 1

The mainline from Hamilton to London went directly through the Steele farm, making a large fill south of the house, thus cutting off the farm houses' view of the fields. To allow access to the fields across the line, a stone arch bridge was built, that stands to this day. The line itself was discontinued after the Grand Trunk became the Canadian National.1

Mr. Gowan demolished the right of way to restore the farm's view of its fields. With the orchard and the grape vines having long since disappeared, he renamed the farm 'Creek Valley Farm' for the three creeks that provide water to the farm.1

John Steele was born in Connecticut on June 12 of 1776 and Catherine Long was born in Pennsylvania on November 4 of 1776. John and Catherine moved to Canada in 1807 and settled in Saltfleet Township near Hamilton where seven of their children were born, including their youngest son, Jacob. No record exists of the date of their relocation to Dumfries.1

Vine Cottage is a rectangular-shaped, single detached, two storey house with a single stack chimney on the left hand side. The second storey main windows are double hung sash transom with arcading and arch radiating voussoirs while the roof trim is a boxed cornice with brackets. Front facade is made from brick whereas the rear has a mixture of cut coarse stone and rubble with a natural finish. 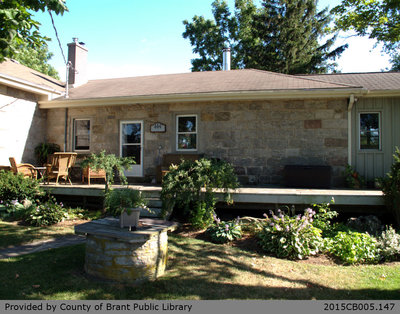