Two miles east of St. George is the Nixon Homestead, built by Charles Nixon in 1853. The house has remained in the family to the present day.

Henry (the oldest son) and his brother built the brick house adjacent to the stone house. Note #

This barn was built using beams from a previous barn and could hold 40 holdsteins. The Nixons have shipped milk to Hamilton since 1920. 1

As the eldest son, Harry would go on to take over the farm. 2

1919 – Harry C. Nixon Elected as Member of Parliament for Brant

Jackson Nixon was the eldest son of Henry Nixon, Harry's older brother. He enlisted in the R.C.A.F during World War 2 and was subsequently killed in September, after enlisting just two months prior in July. 1

1953 – Robert Nixon Goes on to Teach in Toronto

Harry was driving home after an evening church service on October 22 when he suffered a heart attack and died at the wheel of his car.1

His son Robert resigned his teaching position at Pauline Johnson. 1

1962 – Robert Nixon Elected as Member of Parliament for Brant

In a by-election in January, to fill the vacancy left by his father. Note #

Charles was born on the Niagara peninsula to a family of United Empire loyalists who had migrated to Canada after the American Revolution. As he was not the oldest son and would not inherit his parents farm, once he was married he was furnished with a cart, oxen and other necessities and came to the County of Brant to homestead. Despite his young age he had learned the wheelwright trade. He built a house with his wife and soon had three children. Tragically, a plague swept the area and his wife and children died within two months of each other. By this time, his father had died as well, and left him with a significant inheritance. Charles took this inheritance and used it to purchase land in South Dumfries as well as to construct the stone house that stands there today. There he married again. 2

Harry C. Nixon began his Parliamentary career at the age of 28. He was elected the member for Brant in 1919 and continued in that capacity until his death in 1961. He became the provincial Secretary in the U.F.O. Labor government formed at the time by the Hon. E.C. Drury. Under the administration of Hon. Mitchell Hepburn, he became Premier of Ontario, taking the office on May 18 and resigning three months later after the government's defeat at the polls on August 17. He attended school in St. George, Brantford, and later the Ontario Agricultural College at Guelph where he received his B.S.A. degree. He married Alice Jackson of Lambton County.1

Robert Nixon was born in St. George where he attended Public and Continuation Schools. He graduated from McMaster University in Hamilton in 1950 after studying the sciences2 and attended the Ontario College of Education in Toronto. In 1951 he went to teach in Sault Ste Marie as a High School Biology teacher. In 1952 he married Dorothy Loveless of St. George and now has two sons and daughters. He moved to Toronto to teach there in 1953, then returned to St. George in 1954 to manage his father's farm. He taught at Pauline Johnson Collegiate and North park Collegiate before entering politics following the death of his father. There he went on to become the provincial party head in 1967.1

The homestead is a two storey single-detached building with a dual stack chimney linked at the top located side-right. The exterior walls are coursed cut stone with a rock-face finish and the house has a low gable roof. The upper level windows are 2 sash double hung while the lower level windows are 2 sash casement. There is a small balcony above the centre 2 panel door on the main facade. 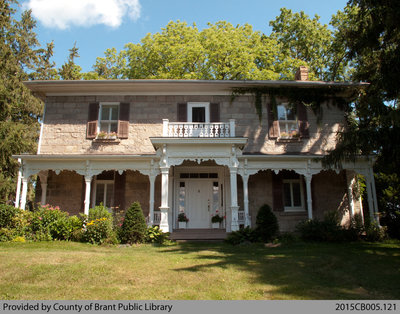