Howell Block has served a wide variety of functions within the St. George community, including a tinsmith, drug store, hardware store, library, museum, community hall, newspaper office, lawyers office, central telephone office, and post office. The original store and distillery was owned and operated by Nicholas Barmore in 1834 and the original building was demolished in 1891 with a stone building constructed in its place.

Presently, the building is in the care of the South Dumfries Historical Society and is the home of the St. George and Area Museum and Archives.4

Howell Block is the oldest First World War memorial in Brant and one of the oldest in Ontario. 5

The site is designated under the Ontario Heritage Act and the national inventory of War Memorials (35007-001).

Ewart hailed from Dundas, and placed the store under the management of George Stanton, who had been appointed village postmaster in 1838 and had conducted business in the store for Nicholas Barmore as well.1

George Stanton’s brother, Samuel, purchased the building for 250 pounds in March from James Ewart’s executors (he died December 17, 1853), and allowed George to concentrate on milling form then on. 1

Stanton would continue his career as postmaster in Paris, leaving the care of the store to his brother, Samuel.1

Samuel Stanton, now postmaster of St. George entered a partnership with John Hudson however luck was not with them and they went bankrupt. Christopher Batty purchased it in October and went on to open a tinsmith shop and general hardware store in part of the building.1

Chris Batty offered the store and stock for sale, but for whatever reason, the sale was never held.1

Batty took on John. P. Galloway as a partner in April.1

Lawrason took out a lease on the premises, ending the Batty-Galloway partnership.1

Lawrason moved to North Carolina in November. On November 24, James H. Fleming and William W. Howell formed a partnership and rented the store.1

Jonah Howell bought the store for $2000 at the public auction on January 12 after Christopher Batty went bankrupt. Jonah Howell continued to honour the existing leases by Walter Smith, who operated a tinsmith, and by Fleming & Howell, who operated a drug and hardware store.1

Hickox would go on to found a tinsmith dynasty in the village.1

James H. Fleming goes on alone for another decade.1

Hickox sold on December 1st, and moved into a new block he had commissioned to the north on Main street.1

Demolitions began in April and James H. Fleming has to vacate the premises in the meantime. The present stone block was built by Jonah Howell4, beginning in April and continuing throughout the summer. Once complete, Fleming moved back in, and William Grant occupied the other half of the building with a dry goods and millinery store.1

Howell unexpectedly passed away on May 10, at the age of 77. His property passed to his wife, Mary.1

He established a dry goods and millinery outlet. The upstairs was used by John Shepperson and Alex Robertson for a newspaper office and a lawyer’s office respectively.1

In March, the Central Telephone office was located in Howell block.1

Due to the death of his wife, Lindaw sold his stock and store to John Thomson. Unfortunately Thomson was unsuccessful and abandoned the store within a few years.1

Saas’s store in the Lawrason Block had burned down.1

The sale occurred in January and Kitchen continued the store despite a lack of experience with the drug business.1

When the north shop became vacant, Kitchen leased it and combined the two into one: McNeilly managed the drug, stationary and hardware shop while John Kitchen’s son, Frank took care of the new shop. 1

McNeilly resigned in April and was replaced by a Mr. Ritz, but returned in June to resume his work.1

He opened a boot, shoe and grocery store in September. John Kitchen sold his lease to John P. Lawrason and Osborne Howell who continued to employ James McNeilly.1

After his move to Milton, McNeilly was replaced by a Mr. McKenna and a few years later by Harry Burns, forming the new firm of Howell, Lawrason & Burns.2

McNeilly took over Maitland’s half of the property, while Joseph Burke took over the hardware shop in the south side.1

The property changes hands in September, but Mr. Wood only carried on for ten months before declaring bankruptcy on July 5, 1924. The property was subsequently sold to a group of St. George citizens who held it in trust for the St. George Community Hall.1

The building was dedicated as a memorial on August 20, 19256 during the ceremony that opened the hall to public use presided by the Hon. Harry Cockshutt, Lieutenant-Governor of Ontario (1921-1927), who dedicated the building as a “Memorial to those who fought in the Great War.” A bronze plaque acknowledging this dedication with the names of those from the area who served was unveiled: “This building was presented in memory of Salem Griswold Kitchen by his wife was remodeled by the citizens of the community and is a memorial to the soldiers who fought in the Great War.” The building was placed into the care of a board of trustees, whose longest serving member was was the Hon. Harry Nixon (MPP 1919-1961 – Premier of Ontario 1943.)4 The St. George Public Library moved into the building this year.2

The local radio station C.K.C.R. used part of the building as broadcasting center for its Sunday afternoon show.1

On June 1st, the post office officially moved into the south half of the hall. The south side had to be first renovated, and this work was contracted to Mr. H. Mitten. Ernie Harrott was given a contract by the department to build a counter, lobbies and other such necessary fixtures. At this time it was also decided to deed the property to the Township of South Dumfries in order to apply for a grant that would allow the restoration of the north side. Due to this renovation, several changes were made to the building: the recessed front was brought out to conform to the rest of the building; and an entrance was made for the upstairs and for the lower banquet hall; the ceiling of the banquet hall was lowered, insulated, and sound proofed; a tile floor was added; a cloak room and two washrooms were installed; the electrical system was rewired and redecorated.2

Marboleum treads were placed on the stairs with aluminum nosing. The auditorium and the outside hall floors were sanded.

A combination door was put on the inside of the back kitchen door to make a vestibule. This made the kitchen warmer in winter and cooler in summer. Aluminum combination windows were placed on the two east windows of the banquet hall.2

A new roof was put in place, two modern washrooms, two tiled and paneled dressing-rooms, the stage was raised 10 inches and the back and sides were re-made of paneling with proper door frames. A small snack bar was added near the stage, with facilities for making tea and coffee, serving sandwiches, and washing up. The ceiling of the hall was insulated and covered with acoustic tiles. All the electrical wiring was replaced and new electrical fixtures were installed.2

The library was growing too large for its premises in the Community Hall Meeting room, however the north side of the basement of the township wall was found to be too damp to house the books. Luckily, the south side was dry enough, and a grant of $3000.00 was given by the Township Council, which was supplemented by an additional $1225.00 from the South Central Regional Library System, and a further $1000.00 from savings was sufficient to clean the premises and install walls, ceilings and more to create a working library. On June 5, Reeve T.O. Loveless and Board member Fred Bemrose officiated the opening of this new library.

2006 - A Second Plaque is Added to the Building

Unveiled on July 1, 2006, the new plaque recognizes those from the St. George and South Dumfries area that served in World War II and Korea.4

Howell Block is a two and a half storey building based on a Georgian style with a solid stone frame, symmetrical design, and original central doorway. The original display windows were removed in the mid-1920s and replaced with concrete walls and the central doorway was also bricked in and covered by concrete and there is now a commemorative plaque hung there. A wooden addition housing a stairway was later added to the southeast end of the building. Exterior walls are comprised of both stone and concrete and feature quoins. Arch designs above the upper windows are radiating voussoirs with keystones. 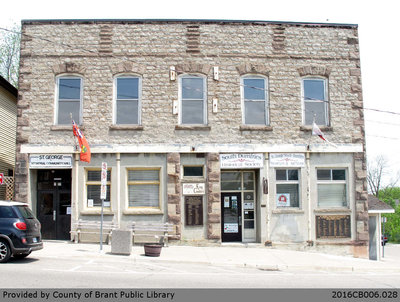