The original house was built by Hiram Capron in 1846 and known as the The Stone House. It took three years and twelve stone masons to complete and is an exemplar of the Greek Revival style popular at the time. Note how the square profile, flat hip roof and roof lantern are reminiscent of Charles Mitchell House built in 1842.

When John Penman of Penman Knitting Mills bought the house in 1887 and re-christened it 'Penmarvian', a combination of Penman and McVicar (his wife's maiden name). He commissioned an extensive renovation project in 1889 that turned the Greek Revival temple plan building into a Victorian castle, complete with bay windows, towers, veranda, and decorative ironwork.

After Penman's death in 1932 the house was willed to the Presbyterian Church for use as a home for its aged minister, missionaries, and their wives. Included in his will was $100,000 to go with the home for the purpose of paying for general upkeep and maintenance. The house operated in this capacity until 1970 when rising upkeep costs forced the building to close down. There was an initiative to turn it into senior citizens' housing in 1973 however delays caused the building to remain virtually empty until its next proprietor.

Hiram Capron employed 12 stone masons to work on the house.1

The house was sold at a public auction and advertised as a fine, large cut stone residence surrounded by about 12 acres of land which slope to the Grand River. 1

John Penman passes away at age 93.1

At this point the house was in rather poor condition and John Van Gastel spent what we can only assume is a small fortune restoring it to its former glory. Part of the renovations included the removal of the middle gable window on the roof as well as of the veranda and the fire escape. Wood from the veranda was reused in replacing rotting wood trim around the roof. Inside the plaster trim on the walls and ceiling was repaired, likewise with the wood trim. 1

The award was presented to Mr. and Mrs. Toncic in recognition of their efforts in maintaining the historical and architectural character of Penmarvian during the renovations meant to modernize it and turn it into a retirement home. 1

Penmarvian is a square-shaped, three storey single-detached building with a tower offset on the right side. The exterior walls are ashlar stone with pilaster and decorative capital designs. The cross gable roof has a slate surface with decorative roof trimming and plain gable dormers. Penmarvian features both flat and semi-circular window openings with bay or double hung windows. The main entrance has a semi-circular opening and 2-leaf door. 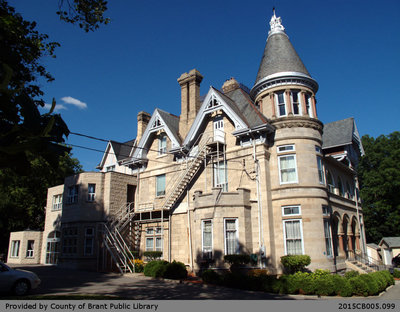