With construction beginning in 1842, the Charles Mitchell House is one of the renowned cobblestone buildings in Paris constructed by Levi Boughton. The house is a great example of Greek Revival-style architecture. Numerous people have lived in the house after Mr. Mitchell moved to his farm in Blenheim Township in the late 1850s, including former president of the Ontario Medical Association, William Burt, and renowned local painter, Frederic Stinson Evans.

Mitchell moved to his farm in Blenheim Township in the spring of 1858, where he remained for 15 years and cleared about 100 acres of bush land.1

On November 1st the Hill family bought part of Lot 8 and all of Lot 9 from the Charles Mitchell, taking out a $1200 mortgage from him.1

On October 2, Thomas Hill paid off his mortgage to Charles Mitchell.1

William Burt paid $400 and mortgaged another $2600 from Joseph Steele.1

On September 3, William Burt paid off his mortgage to Joseph Steele.1

The eldest daughter of William and Janet was born on July 5.1

The middle daughter of William and Janet was born on April 17.1

The youngest daughter of William and Janet was born on December 29.1

The north cobblestone wing addition was built on the wishes of Dr. Burt. The work was contracted to Mr. John Carnie, who had Mr. George Tate construct the wing.2

William Burt took out a $1300 mortgage from Arthur Qua on September 5.1

On September 4, William Burt paid off his mortgage to Arthur Qua.1

The youngest daughter of William and Janet dies on August 6, at age 10.1

The oldest daughter of William and Janet(deceased) dies on November 22, at age 23.1

William Burt took out a $800 mortgage from John W. Fasken.1

On January 9, William Burt paid off his mortgage to John W. Fasken.1

On February 22, the Evanses take out a $1500 mortgage from Paul G. Wickson and Elizabeth Sarah Wickson.1

On September 12th, Frederic Stinson Evans died at the age of 56, as a result of falling 20 feet while replacing broken windows in the agricultural building.1

On October 14, Grant-Bertha S. Evans, the administrator of the buildings of the estate, sold the property to Andrew H. Monteith and Hannah H. Monteith for $5000.1

On March 1, Andrew H. Monteith paid off his mortgage to the Elizabeth S. Wickson (Paul G. Wickson having died in 1922).1

On March 1, Andrew H. Monteith and Hannah H. Monteith took out a mortgage of $1500 from Ernest Kenney.1

On March 1, Andrew H. Monteith paid off his mortgage to Elizabeth S. Wickson (Paul G. Wickson having died in 1922).1

On October 27, Hannah Maria Monteith paid off their mortgage to Ernest Kenney.1

At this time the house was still owned by Hannah D. Monteith, it is unclear if the Poland family was renting it or some other arrangement had been made.1

On July 24, the executors of the estate of Hannah M. Monteith (Jean Maus, and Frances R. McEwing) transfer ownership of the house to Herbert D. Monteith for $1.00.1

On July 24, Herbert D. Monteith and his wife took out a mortgage of $3000 from Arthur M. Sowden, executor of the estate or Arthur E. Sowden who was in turn the surviving executor for the estate of George S. Sowden.1

On April 25, Herbert D. Monteith paid off his mortgage to the estate of George S. Sowden. (Paul G. Wickson having died in 1922).1

William and Patricia Gerbrandt bought the house and lands on March 28.1

The house was first offered for sale by A. E. LePage Realty on June 30.1

The house was first offered for sale by Thaler Realty on March 28--a listing which expired. Then another offer for sale was made in the Paris Star on September 25 by Karmiris Realty.1

Norman and Pauline Derrick bought the house on May 1.1

1986 – House Designated Under Section 29 of the Ontario Heritage Act

On April 15, the house was officially designated as a historical property.1

Charles Mitchell was born in Sullivan County, near Chitenango village, in the State of New York on August 1 of 1806. There he spent his childhood and took up the carriage and wagon trade. He worked in Le Roy, Tennessee for a number of years in partnership with Mr. Thomas Ladd. In 1832 he came to Canada and carried on business in Hamilton until 1836. He was married to Miss B. E. Drake of Le Roy, N.Y., on October 1st 1833. In 1838 he moved to Paris and from that time to 1858, carried on business in this town as a blacksmith, wagon, and carriage maker. He also carried on the fanning mill business for a number of years. In the spring of 1859 he moved on to his farm in Blenheim Township, three miles west of Paris, remaining there for over 15 years, clearing up about 100 acres of bush land. He moved back to Paris in the fall of 1873 was been involved in the buying and selling of houses2. He had six children, 3 sons and 3 daughters, the sons survive him. His wife died on August 25th of 1875. Charles Mitchell died on November 24, 1881. 1

William Burt was born on March 24, 1849 at Branchton. He was the son of Robert Burt and Abigail Cornell. He attended elementary schools in Harrisburg and Scotland and Dr. Tassie's Grammar School in Galt. He received a scholarship and went to Toronto University Medical College from 1866 to 1870, except for the summer of 1869 when he studied in New York. In 1870 at age 21 he graduated as a silver medalist and joined staff of Brooklyn General hospital for his internship from August 1870 to August 1871. From August 1871 to February 1872 he was an Acting Assistant Surgeon in the U.S. Army in Texas under General Merritt. He returned to Paris in June of 1872 and married Janet McHoull Ballingan on June 16, 1880. He was an examiner for the Toronto University Medical School and for the Ontario Medical School and in 1905 he was president of the Ontario Medical Association. In Paris he was the chairman of the Board of Education and was also president of the Children's Aid Society, the British and Foreign Bible Society, the Paris Cricket Club and the Paris Lawn Bowling Club. William passed away on March 14, 1919. 1

Frederic Evans was born in Paris, ON, the eldest son of Mr. & Mrs. Thomas Evans. He had two brothers and five sisters: Harry of Paris, Percy of Edmonton, AB; Mrs. Davidson of Canduff, SK; Mrs. Myers of Echo Place, Brantford; Mrs. James Logan and Miss Edna at home at the time of Fred's death in 1921. He married miss Elaine Butler in 1886 and had three chidlren: Wilfred Evans, Ottawa; the Misses Birdie and Marion Evans at home. Frederic Evans was a well known painter and paperchanger. 1

The house is one and a half stories, a practice popular at the time of its construction due to the increased taxation on two story houses. The cobblestones are lake-washed or water rounded, with oval stones predominating over round ones. Instead of quoins, the corners are instead made with cut-stone piers with molded capital and bases which support a heavy three member Greek Revival entablature. Window openings have cut stone sills and lintels. The small wing projecting from the right side is a later addition built in 1885 for use as a doctor's office. 1

Charles Mitchell house can be considered a textbook example of the Greek Revival style of 1825-1860. Houses in this style were in fact prevalent in New York State at the time--though rather rare in Ontario. A 'temple building' with a symbolic approach to architecture, it is a great example of the American interpretation of the Greek Revival style and the fixed rules used in the design of such buildings.1

The nearly square floor plan is set upon a high foundation and topped with a flat hip roof and lantern which results in a cube like profile of the house. The front door is set to one side of the house, allowing for a side hall with a drawing room at the front of the house and a dining room in the back. The porch features Doric columns and the front door is two panelled, heavily mounded and set in a rectangular frame. High ceilings and bold interior moldings complete the look.1

Light to the second storey rooms was originally provided only by floor height 'stomacher' windows (so named after the fact that they rose to stomach height)2, set in the deep cornice under the roof and covered with a cast iron grille. A second light source came from small windows set into the lantern. Unfortunately, practical consideration such as lighting, ventilation, and division of space were subordinate to questions of style in this Greek Revival house, and dormers were added later to alleviate the lack of light and ventilation.1 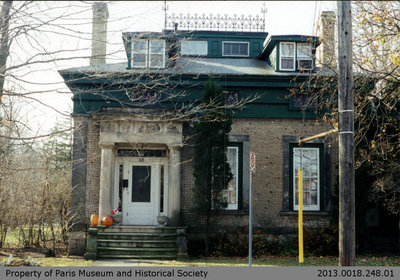