Bryning Manse was built for Reverend John Bryning in 1830. Bryning had been an English merchant before he "got religion" and traveled to the New World where he eventually settled in Mount Pleasant to become the resident preacher. He was an important figure in the religious landscape of the County of Brant and continued his work until the infirmities of old age no longer allowed him to. His home reflects his station, eschewing fanciful ornamentation and projecting an air of simple graciousness.

This merger however was not without opponents, and on July 3, they formed a "Free Church", creating a schism in the Reverend's flock.2

Absalom Shade, the land speculator owning the land that Bryning Manse was built on, gave Rev. Bryning the deed to the land.2

On May 22, Bryning purchased six tenths of a an acre in Lot 7 of the First Range East from John Ellis. He established the Mount Pleasant Presbyterian Church on the property.2

The census of 1852 recorded Rev. Bryning (aged 81) and his third wife Nancy (aged 52) as residing in their manse at Mount Pleasant. 2

On the 15 of September, John Bryning, aged 83, died at Mount Pleasant.2

This addition featured a master bedroom with an en suite in the second floor and was designed by the local form Birdhard Cheney and Van Porten. The wall paneling is thought to be American chestnut.3

A summer kitchen had been added at some point as a tail on the south side, however by this point the addition was collapsing and was torn off.3


The general condition of the rest of the house was also rather decrepit and extensive repairs had to be done. Three of four sill beams were replaced, siding was repaired on the north, east and west walls, a new porch floor was added, and the exterior was painted. Window sills on the south wing were replaced and basic utilities were added. Interior work consisted of installing considerable trim work and replacing sections of flooring. An incompatible fireplace and hearth located in the dining room were removed (the house had originally been heated with a wood stove). 3

A 500 square foot addition designed by Craig Newsom from the firm Mark, Musselman, McIntyre added a modern vestibule, kitchen area and ground floor laundry. The addition took the place of the old summer kitchen on the south side of the house. The repetition of many of the original design elements such as windows, siding, roof lines and trim have allowed the more modern additions to blend in with the original structure of the house.3

John Bryning was born in Lancashire, England on July 6 of 1770. Around the age of 15 he was apprenticed with a mercantile firm at Liverpool. He was known for being a studious young man who would purchase candles with his wages and spend long hours pouring over books to improve himself, rising to the position of foreman--in this capacity he traveled extensively. In 1815, Bryning was in Brussels when he witnessed the Battle of Waterloo. After the end of the Napoleonic wars, he found the mercantile business had become unprofitable and returned to London where he finished his education. He took up the calling of the ministry and ventured to America in 1820. He spent a short time in New Brunswick as a preacher before following his oldest son (also named John) to the Long Point Settlement in Upper Canada. He taught school and preached at Forestville and Normandale in Charloteville Township, Norfolk County before proceeding north to Oakland and Mount Pleasant in the County of Brant. 2


Bryning was married in the old world, but no record exists of whom his first and second wives were. It is known that he had two sons in their late teens as of 1820. After coming to Canada, he married the widow Nancy Lee Kirk om January 22 of 1826 and had a second large family in Mount Pleasant. 2

The style the house was constructed in reflects both the prevailing architectural trends of 1830s Upper Canada as well as the sensibilities of Rev. J. Bryning. The house was built in a vernacular (adapted to local conditions and materials) Regency Gothic style, which appealed to the colonial elite due to its simple graciousness, its practical layout and its British origin (American neo-classicism was very much being shunned at the time). The Regency Gothic style is meant for countryside construction, where it aims to blend in with the landscape and facilitate communion with nature, with careful selection of placement to ensure the best views, many windows and an emphasis on picturesque composition. Unfortunately naive British settlers found the style unsuited to the harsh climate of Canada.


The manse’s windows are of the 6/6, 12 pane divided sash type. In the 1830s, such windows would have cost a significant amount, suggesting that Rev. Bryning had the means to afford them. A practical concession to Canada’s climate are the window shutters--now missing, although their mounting points remain. The veranda with its awning and fanciful trim is another staple of the Regency Gothic style brought to England by military officers and gentry that served in the Indies, Spain, or Portugal. Such verandas not only gave a measure of protection to the house from wind and sun, but implied that the owner had sufficient leisure to use them, as well as bringing people closer to nature.


The Regency aspect is evident in the house’s geometric proportion while the pointed arch of the windows in the front and end gables are pure Gothic. Gothic’s defining feature was vertical construction, meant to express man’s soaring spirit while keeping his feet planted firmly in the earth. Bryning manse’s vertical board and batten walls increase this heavenward reach while being both practical and economic. The dressed-in-groove pine boards with chamfered battens and refined details indicate the availability of a steam powered saw mill. It is in fact one of the last houses in the county to exemplify this type of construction.


Note that despite the popularity of intricate ornamentation that came to be a dominant feature of Gothic architecture by the 1850s, Bryning manse eschews it completely, likely due to the incompatibility of such ostentatious decoration with the house’s Presbyterian occupants. The house was built to be a storey and a half tall to avoid the extra taxation placed upon two storey houses while maintaining sufficient space for a second storey under the roof.1 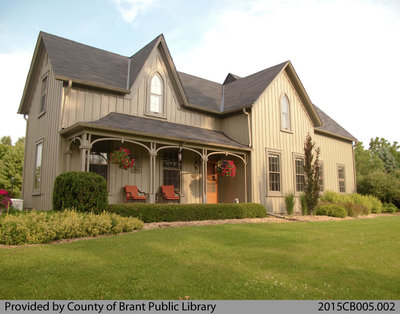