The construction process of the mill began in 1869 and went on for three years, culminating in a stone building built by local stonemason Mr Reith. Goldie and McCulloch supplied two ten inch wide Leffel water wheels and over five hundred feet of flume pipe.

By the fall of 1872, Snowball had formed a partnership with James McQueen and moved to North Carolina to take control of their newly purchased iron mining firm. Snowball's Mill was leased to William B. Wood from that period.

Over the years, the Mill changed hands many times. William Wood was a successful businessman, so often the name of the company owning the mill would change, but it would still be Mr. Wood at the metaphorical wheel. In August of 1906, the Mill was bought from the Brant Milling Company by Brant Wood Flower Mills Company for the sum total of $1.00.

Local stonemason, Mr Reith is commissioned to work on the mill, while Goldie and McCulloch supplied two ten inch wide Leffel water wheels and over five hundred feet of flume pipe for the internal mechanisms.

In the fall, William Snowball & James McQueen enter into a partnership and Snowball moves to North Carolina to take control of their newly purchased iron mining firm. The Mill is finished but in his absence it was leased to William B. Wood.

William B. Wood purchases the mill from Snowball for the sum of $9,000.

William Wood enters into a partnership with his brother, David Beattie.

Steam power was added to the mill, enabling production to increase to 200 barrels of flour per day.

William Wood enters a partnership with Abner Ingleheart and Orville T. Hopkins and re-names his company.

1895 – Ingleheart and Hopkins Secede from Partnership

1925 – Company Acquired by Lake of the Woods Milling Company Ltd.

After the tragic drowning of a young boy, the pond beside the mill was filled in.

The Snowball Grist Mill is a square-shaped, four storey single-detached building. The exterior walls are squared rubble stone with a natural texture. Window openings are flat with arch radiating voussoirs and have a plain trim surrounding the sides. The windows themselves are double hung sash-style. When the building was constructed there appears to have been two main doors and an additional door at the rear. Bricks above the doors are also arch radiating voussoirs with a center keystone. There is a date stone with the inscription “W.S. 1877” inscribed above one of the main doors with the “W.S.” presumably standing for William Snowball. 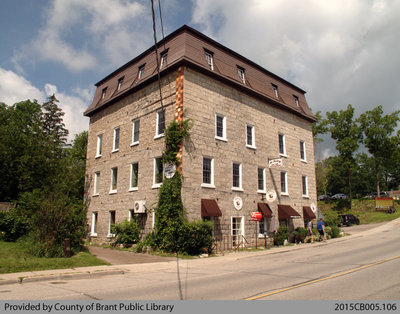