Media Type
Text
Description
This item is a letter dated December 10th, 1846 addressed to Thomas B Campbell from W. H. Fisher in Saint John, New Brunswick.
Date of Publication
1846
Subject(s)
Correspondence
Documents
Local identifier
2002.003.002
Collection
Marjorie Schofield Collection
Language of Item
English
Geographic Coverage
Copyright Statement
Copyright status unknown. Responsibility for determining the copyright status and any use rests exclusively with the user.
Recommended Citation
Letter Written to Thomas B Campbell from W.H. Fisher, 1846. Burford Township Historical Society, Item No. 2002.003.002.
Terms of Use
The information and images provided are for personal research only and are not to be used for commercial purposes. Use of this information should include the credit "Burford Township Historical Society and Museum."
Contact
Burford Township Historical Society
Email
WWW address
http://www.burfordtownshipmuseum.ca/
Agency street/mail address

I wrote to you about the middle

of last September since when I have heard nothing from

you + almost begun to think that you have gone away from

Burford, tot he far west as you once mentioned in your

letter you expected you would, or probably you may have

been unwell in the place of your abode among [strangers]

to your early life although I hope you find them friends

now. [We] home here are all well just about as usual

Saint John the same old place getting on by slow degrees

have been erected or about [that] this season & the next

Uncle Thomas & the others new boat [steam boat?] of which

is launched & expected almost to go to [Fre'ton] & back again

from seven thousand pounds, Uncle [Illegible] is getting on now

pretty well '[Illegible]' as far as Regards his

[pressing] difficulties about three years ago

All Mr Fenwick as usual [Mr] Hagarty's the same

Martha as usual, Uncle Joseph, about the same, [Amy]

has pretty hard times I rather think, confound that [Illegible]

Tom I hope you are a teetotaller Grandma's health pretty

good, not much difference, Aunt Sophia was all as usual

wehn last heard from, I guess I have said all now

from them, wrote to you last time about your farm

the man who went with me, [Illegible] told that about as good

towards fall, wrote you if you would send me a deed

in my name, have been expecting to hear from you but have

not, have seen no one to whom I could sell the place

decisive about it, in the meantime if an opportunity

offers I will not let if slip

I am still in the old place at the old business

[Same] old [six pence], probably I may change in the

Spring have not present thoughts of getting married have

Ed & Zeke are about as usual Zeke's at Mr [Laynors]

still & Ed is with Michael [Illegible] Robertson was down this

fall appeared pretty well not much change in him

you [have] married dont know whether it is so or [not?]

however "joy be with you" John [McMoran] was married

first of this month to Miss [Mann], Business have not very

brisk this year hope you are doing well dont forget us

must conclude by wishing you a happy Christmas

merry new year, some faint hope of seeing you here

shortly, this fall or next spring perhaps you may visit

us, all desire to be Remembered to you

I have received yours of the 25th Nov

just this moment sorry to hear of your

illness will write you shortly about the

power of attorney think it would be better if

I had it I could then proceed with certainty 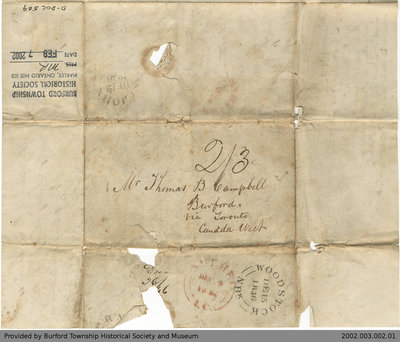